Monaco and the Catholic Church 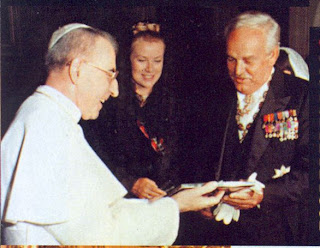 Monaco is one of the last remaining officially Catholic monarchies in the world. Roman Catholicism is the official, established state religion in Monaco. The Principality has had diplomatic relations with the Holy See longer than almost any other modern country; almost as long as the very old Catholic countries of France and Spain. This may seem odd to some for a country known mostly for gambling, yachting and racing but, it should also be remembered, that the Grimaldi conquest of Monaco was done by Guelfs (the Italian faction loyal to the Pope) against the Ghibellines (those loyal to the Emperor). The faith of Monaco was seen quite clearly in the reign of the late Prince Rainier III and his wife Princess Grace, both of whom were serious Catholics.

Rainier III, upon becoming the Sovereign Prince of Monaco, quickly went to Rome to meet with Pope Pius XII and for a papal audience and blessing on his reign. Three years later, in the Marian year of 1954, Prince Rainier III went on a pilgrimage to Lourdes, France to honor Our Lady of the Immaculate Conception. He told Father J. Francis Tucker that he wished to, "...Pray to the Holy Mother for a woman with whom he could enter freely into a sacred union". It must have worked for only two years later he was married to Grace Kelly, who came from a very devout Catholic family. The Blessed Virgin certainly seems to have been involved as the little visionary of Lourdes, St Bernadette, was the patron saint of Princess Grace. This was not known until Father "Tuck" (as he was known) related the story of Rainier's pilgrimage to the Princess at which time she told him that she had taken St Bernadette as her patron during her confirmation as a young girl. On the 25th anniversary of that trip, in 1979, Princess Grace and (as he is now) Prince Albert II went on pilgrimage to Lourdes again.

Prince Rainier and Princess Grace are both given credit for leading their country in a very Catholic way through the numerous changes instituted during his reign such as allowing women the right to vote. Princess Grace was considered such a driving force behind these reforms that the changes were often called a "Coup de Grace". Both exhibited a commitment to the status of Monaco as an officially Catholic country and themselves as Catholic monarchs in the many humanitarian works they undertook throughout their lives. Where there has been criticism of Monaco by the Catholic Church it traditionally revolves around the primary source of income for the principality: the Monte Carlo casino. The Church has not been very vocal, as some might assume, when it comes to the scandals that have plagued the princely house of Grimaldi over the years.
Most Catholics, however, would not be surprised by that as sins and human weakness are considered private matters for the confessional and not the sort of thing that calls for public statements. The Church has had to become involved on matters of the many marriages of the Grimaldis since the Catholic Church does not believe in divorce. As such, Princess Caroline had to obtain an annulment of her first marriage to Philippe Junot which was not granted until 1992. This meant that she had to marry Stefano Casiraghi in a civil ceremony only as the Church still considered her married to Junot. Obviously, the Church tended to be much more strict about the granting of annulments in those days. Today, considering how young Princess Caroline was and the vast age difference between her and Junot I doubt the Church would take so long to rule the marriage invalid. In 1993 the Pope legitimized all of the children of Princess Caroline and Stefano which was essential if they were to ever claim the throne of Monaco.
Recently there has been some criticism of Monaco from Catholic corners, directed of course at Prince Albert II but not because of his illegitimate children, rather, for the moral state and progress of the principality as a whole. Most of these involve calls for Prince Albert II to take more care about being a Catholic monarch over a Catholic principality (which I'm all for) and also urging him to change the coat of arms and possibly even consider closing Monte Carlo casino. That, in my humble opinion, is going a bit far. The matter of the flag and coat of arms involves the images of Grimaldi soldiers dressed as monks holding swords. Evidently some in the Church are still upset that the Grimaldis' ancestors disguised themselves as clergymen in order to take the rock of Monaco so many centuries ago. They would like to see a more peace-ful design. Obviously, I cannot agree with that and I think they are giving the issue too much thought. I cannot imagine many people at all taking the flag and arms that seriously. The design simply reflects an historical event that contributed to the founding of the modern Principality of Monaco. No more and no less as I see it. As for entertaining the idea of closing Monte Carlo Casino, I think this is, again, going too far. I have never heard that gambling was a mortal sin and the income the casino generates allows the Princely Family to do a great deal of good for many people. The family, the late Prince Rainier III especially, have already greatly reduced the importance of the casino to Monaco and expanded into other areas of business. In my opinion, it would be more beneficial to focus on making the Catholic Church more of a force in Monaco and in the lives of the people and Princely Family rather than focusing on outward symbols.
Posted by MadMonarchist at 10:37 PM