Seigneur Jean I of Monaco 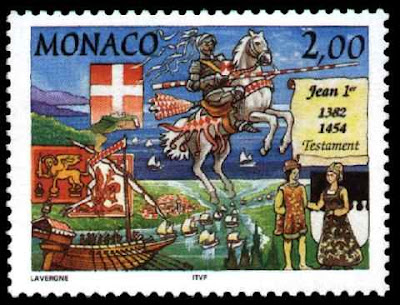 When Lord Rainier II of Monaco died in 1407 the Grimaldi legacy was left to his three sons; Ambroise, Antoine and Jean. They worked out an agreement, when the time came, to rule Monaco jointly, with each one taking a turn every year. Jean I was 25 when his father had passed away and, rather typically for a Grimaldi of his era, was described as “adventurous and enterprising”. Considering this it is no surprise that he found gainful employment as a soldier of fortune; hiring out his soldiers and galleys to the service of Philippe-Marie Visconti, Duke of Milan, the Holy Roman Emperor Sigismund, the Pope and the Duke of Anjou in turn.

At the time, Louis III of Anjou who was locked in a war with the Duras family over Provence. The towns in the region passed back and forth between the two factions, though even when Louis III occupied Monaco his forces were often more of a plague than protection. Nonetheless, Jean, Ambroise and Antoine were loyal and total control of Monaco was restored to them. Genoa was also anxious to have an alliance with the house of Anjou and so surrendered their own claims on Monaco to ingratiate themselves. This allowed the brothers to return to Monaco in 1419 and it was then that they officially declared themselves co-seigneurs of Monaco in the triumvirate that was to last for seven years. When Antoine and Ambroise surrendered their own claims on The Rock in exchange for Menton, Roquebrune and Jean’s estates in La Turbie Lord Jean I became the sole ruler of Monaco.

After the brothers saw to it that the treaties made by their predecessor Lord Charles I were all renewed in an effort to ensure the independence of Monaco but after taking part in a war against the Duke of Milan they were defeated. The Duke of Savoy wanted Monaco obliterated and a Milanese garrison occupied the town. However Jean was a very skilled sailor and Francisco Sforza hired him to fight the Venetians on the Po. He won a great victory there against the famous Carmagnola in 1431. Because of this his lands in Monaco were restored but as vassals of the dukes of Milan. That same year it was Lord Jean I of Monaco who was charged with transporting the East Roman (Byzantine) Emperor John VIII Palaeologus from Constantinople to the Council of Basil in the hope of bringing the divided halves of Christendom together again. However, the tempermental Emperor refused to go with Lord Jean and when he returned without his guest Jean I was defeated by Francesco Sforza of Milan.

While Jean was away the Duke of Savoy fell upon Monaco and when Jean returned he was treacherously taken prisoner. However, showing how far back the history of strong, determined women is in the Grimaldi family, it was the wife of Jean I, Pomelline Fregose, who took in hand the defense of Monaco and she did not relent even when the Jean was hauled out under the ramparts to intimidate her. She vowed to never surrender and Jean managed to get word to her that she should not submit even if he should be killed, either by the enemy or fire from his own men while under the ramparts. The Duke of Savoy finally gave up and released Jean the following year. In 1440 the Duke of Milan renounced his feudal rights over Monaco which then became totally independent again.

Jean I had been loyal to Philippe-Marie Visconti when he was Duke of Milan and it was Visconti whom the Genoese had chosen as their governor. When he died in 1447 (replaced by the Ambrosia Republic) the by now rather aged Jean I sought out his old enemy the Duke of Savoy to be protector of Monaco. In exchange for this he offered parts of Menton and Roquebrune which obviously led to trouble later on. Jean also reportedly considered selling Monaco to the Dauphin of France for 15,000 gold pieces but this was never done as the scheme the Dauphin had to invade Italy was dropped and he had no need of the port of Monaco. At the end of his life Jean I had one pressing issue to deal with and that was the succession. His only children to survive to adulthood were his son Catalan and his daughter Bartholomeé and of Catalan’s children the only survivor was his daughter Claudine.

On April 5, 1454 Lord Jean I drew up the official rules of succession for the House of Grimaldi. The rules stated that succession would pass to legitimate offspring in the male line in order of birth. Only if there were no male heirs could an eldest daughter succeed on the condition that she marry, “a man belonging either to the direct lineage or to the albergo of the Grimaldis” and that he and his descendants must take the name and the coat of arms of the Grimaldi family. These rules of succession have remained mostly unchanged ever since. Lord Jean I died that same year having ruled over Monaco on three occasions, alone or in cooperation with his brothers. He was succeeded by his son Catalan who lasted only three years longer.
Posted by MadMonarchist at 1:00 AM