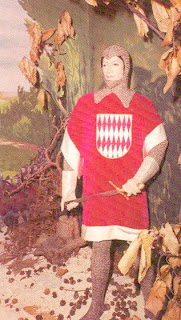 Rainier II became Lord of Monaco on June 29, 1352 ruling jointly with Lord Antonio. Earlier, in 1350, Jean II became King of France and the Hundred Years War soon flared up again with King Edward III of England and the famous Black Prince. Lord Rainier II was ready to participate just as his grandfather and namesake Lord Rainier I did. In 1355 he reported for duty with 24 war galleys and 6,000 crossbowmen. The following year he led his forces with the French army at the epic battle of Poitiers on September 19, 1356. The French side suffered from a lack of organization and in one of the greatest victories in English history the French army, which outnumbered the English by about 2 to 1, was soundly defeated and King Jean II himself was taken prisoner by the Black Prince.

The terrible defeat, combined with the humiliation of the king and most of his knights being taken prisoner, caused the middle class, feeling let down by the aristocracy, to equip a fleet on their own to go to the rescue of Jean II. Joined by other forces they defeated the English at the battle of Winchelsea, even landing and taking the town before returning to Boulogne. Shortly thereafter the Treaty of London was signed, Jean II was freed and peace restored. The new King of France, Charles V or Charles the Wise, began rebuilding the French fleet and made extensive use of the Mediterranean ports, Monaco in particular. Rainier II fitted out four galleys and sailed to the English Channel where he met an English squadron that was escorting Charles II of Navarre to Cotentin. He captured an English ship of 180 tons which he sold for prize money in Normandy. When the English moved to take revenge for this action on some Genoese ships in the area Rainier II arrived in time to save the day, destroying the English force and following up with a number of raids on the English coast.

Stories abound about the exploits of Rainier II, some factual and some legendary with it becoming increasingly difficult to separate the two. One such story was that the ship Rainier II himself was commanding was run aground on the Isle of Wight though other sources say Sandwich. When English troops approached and hailed the vessel, asking to whom it belonged, Rainier II replied, “To the King of France”. The soldiers then demanded he surrender it to the “King of France and England”. Rainier II asked the name of this individual to which the soldiers proudly replied, “Edward!” but Rainier boomed back, “Edward! That is not the name of the King of France; he is called Charles and to him only will we give up our ship”. The English troops attacked and Rainier II and his men battled them long enough for the tide to come in, re-float the vessel and allowed them to sail away.

Later Rainier II was charged with escorting convoys of merchant ships through the dangerous waters of the English Channel. When he got word that John of Lancaster was preparing a move to Calais with 11,000 troops he boldly threatened Southampton. It was only a diversion though as the port was well defended due to all the trouble and he had only a few ships and 1,200 men. Unfortunately, it did not work and the Duke of Lancaster made the passage to Calais, meeting the Monegasque flotilla and capturing Rainier II in the process. It was the spring of 1375 and a greatly impressed King Edward III bought Rainier from the Duke for 12,000 gold francs.

Later on peace was declared and Rainier II was freed but by 1377 the war was back on again and saw action at the great naval victory off Rye. The victors then began fighting amongst themselves between those who wished to go on and those who wished to occupy Rye and make it a French enclave in England that would be the equivalent of the English enclave at Calais. In the event they did land, fought a few skirmishes and captured some English soldiers from whom they learned that their great foe King Edward III was dead and Richard II was now king. Lord Rainier II burned the town of Lewis and then put to sea again, going on a campaign of pillage that hit Portsmouth, Dartmouth and Plymouth. They even overran most of the Isle of Wight other than the castle where the governor held out with his forces, refusing to give up.

The French and Monegasque did not sack the island but ransomed it for a 1000 marks. There were numerous other raids and daring deeds but at some point Rainier II tired of being in the employ of French and by the time peace was restored had already left. Doubtless, part of the reason for this was the growing aggression of the Barbary pirates in the Mediterranean who were raiding the Riviera and forced Monaco and Genoa to turn to France for assistance. However, it was not long before the French themselves were in need of assistance when the famous King Henry V of England showed up with an invading army and a large fleet at the mouth of the Seine River. France then had to ask Genoa and Monaco for help. They sailed north and tried to break the English siege of Harfleur in a gallant attack but Henry V was victorious and the town surrendered. He then march on toward Calais and won his most spectacular victory at the battle of Agincourt. By that time, however, Rainier II had long since ceased to be the Lord of Monaco. That ended on August 15, 1357. From that year until 1359 Monaco was under Genoese control with control passing back and forth between them and the Grimaldis for some time after.
(photo from the Wax Museum of the Princes of Monaco)
Posted by MadMonarchist at 1:47 AM