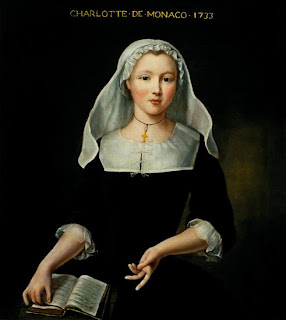 One of my favorite paintings of one of the Princesses of Monaco, this work was done by Pierre Gobert in 1733 of Princess Charlotte of Monaco, daughter of Prince Jacques I who was a nun of the Order of the Visitation. Princess Charlotte, known as Mademoiselle de Valentinois and then as Mademoiselle de Monaco, was born on May 19, 1719 in Paris and her parents decided she would devote her life to the Church when she was only a few months old. However, Jacques and Louise-Hippolyte later changed their mind when they thought a good match could be made for her and in 1724, when the Princess was only 5, she was engaged to the Prince d'Auvergne. Yet, this proposed marriage did not come to be and before she was much older the engagement was broken off and Charlotte went to a convent to begin her education. She considered becoming a nun while there, wrestled with the decision but did finally take her vows as a sister of the Order of the Visitation. She did leave the convent a number of times to visit her family and, as an interesting historical point, the convent in which she took her vows was the same one where the convert Louise de la Valliere went to do penance.

Posted by MadMonarchist at 12:12 AM