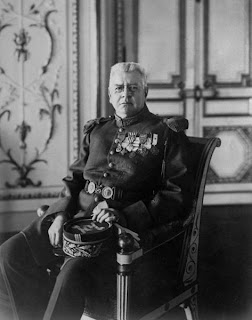 The predecessor of Prince Rainier III, his grandfather Louis II, occupied the Monegasque throne during one of the most crucial periods in her history. He is generally remembered for the poor state of the principality which he left to his grandson, however, Louis II was a very complex man who faced a number of hardships and had many excellent qualities. He was born Louis Honore Charles Antoine Grimaldi in Baden-Baden, Germany on July 12, 1870 to Prince Albert I of Monaco and Lady Mary Victoria Hamilton. His family life was not to be a very stable one though. His mother was the daughter of the Duke of Hamilton and a Princess of Baden and she met Prince Albert I at a ball hosted by the Emperor and Empress of France and not long after a marriage was arranged with Napoleon III suggesting Mary as a good candidate.

Unfortunately, it was not a good match. The new Princess of Monaco was only 19-years-old but very petulant and condescending. Nothing was ever good enough for her, she hated Monaco, was not impressed with her husband and finally abandoned her adopted homeland. By 1880 the marriage was annulled though an arrangement was made with the Vatican to maintain the legitimacy of young Louis in the eyes of the Church at least. However, Louis had been taken away by his mother and so spent his formative years in Germany with his mother and stepfather. He was eleven years old before he ever saw Prince Albert again when his presence was required in Monaco to begin learning the princely trade. Life in the Princely Palace was not exactly ideal for Prince Louis though.

Prince Albert I had made Monaco something of a European hot-spot and was well known in elite circles for his cultural patronage and interest in such subjects as oceanography, paleontology and archaeology. At home, however, he was rather aloof and distant; not much comfort or companion to his young son and a bit of an autocrat. Louis was restless with this state of affairs and as soon as he came of age he left Monaco and enrolled in the Saint Cyr French military academy. He graduated in four years and, showing considerable courage, volunteered to serve with the Foreign Legion in North Africa. This was to have a profound impact on his life, both in terms of his career (he seemed a natural soldier) and his private life.

While on duty in Algeria Prince Louis met and became enamored with a cabaret singer named Marie Juliette Louvet, a mother of two who had formerly been married to the risqué French photographer Achille Delmaet. In no time at all Louis was head over heels in love and wanted to marry the girl but a previously married, single mother who sang in a cabaret was considered far below the station of the Hereditary Prince of Monaco and Prince Albert I absolutely forbid it. This is where the story becomes a bit murky. Louis later claimed that he disregarded the wishes of his father and married Juliette anyway in 1897 but there is no documentation to back that claim up. When a daughter, Charlotte Louise Juliette, was born a year later in Algeria she was considered illegitimate by French and Monegasque law.

However, if his private life was somewhat scandalous his military service was nothing short of exemplary. Prince Louis served with distinction in the French army for 10 years and earned the Legion of Honor before returning home in 1908, interestingly enough, without his wife and daughter. However, when calamity hit Europe with the outbreak of World War I in August of 1914 Prince Louis rushed to the colors and reenlisted. In that time of crisis he again proved his worth as a skillful and courageous fighting man. He was upgraded to a Grand Officer in the Legion of Honor and was promoted to brigadier general during the conflict winning a great deal of recognition for his leadership and personal bravery. Many other members of his family had seen military service over the centuries but it was widely accepted that none ever proved so great a military figure as Prince Louis. In terms of his chosen profession none could fault him but his personal life was about to come back to haunt him.

Prior to the outbreak of the Great War there was already a great deal of worry over the Monegasque succession to the lack of legitimate issue on the part of Hereditary Prince Louis. As things stood, should anything happen to Louis; which was quite possible given his military service, the throne would pass to his first cousin Duke Wilhelm von Urach, the son of his aunt Princess Florestine of Monaco. Obviously, especially at that crucial time, having a German on the throne of Monaco was the last thing France wanted nor were they willing to tolerate such an eventuality. Therefore, in 1911 a law was passed to recognize the legitimacy of Princess Charlotte, officially making her a recognized member of the Grimaldi family and heir to her father. It was thought this would solve the problem and end the controversy but it was not to be as the law was declared invalid by the 1882 statutes. To get around this another law had to be passed, in 1918, which would allow a Prince of Monaco to adopt an heir to inherit the succession rights. In 1919 Louis adopted his daughter and she officially became Princess Charlotte Louise Juliette Grimaldi of Monaco, Duchess of Valentinois.

Oddly enough, in that last year of World War I the Duke of Urach was chosen to be King of Lithuania which the Germans had liberated from Russian rule and for a short time he was nominally King Mindaugas II of Lithuania. That potential throne did not survive the Allied victory and in 1924 Wilhelm formally renounced his rights to the Monegasque throne and passed them to his French cousins, also of the Grimaldi clan, the counts of Chabrillan. Nor was Monaco all alone in this predicament as the French also forced the Grand Duchess of Luxembourg to abdicate for the high crime of being too close to Germany. France also insisted on a treaty with Monaco in 1918 which required the French government to approve of all potential princes of Monaco. It was well that all this was settled as Louis did not have much time to enjoy the peace. On June 27, 1922 Prince Albert I died and his son, the French general, became Reigning Prince Louis II of Monaco.

Although Louis II is often accused of neglecting his principality this is, on the whole, quite unfair. He formed the first Monaco Football Club in 1924 and five years later held the first of the now famous Grand Prix of Monaco. His personality also showed itself in the establishment of the Napoleon Museum attached to the Princely Palace in Monte Carlo where he displayed his impressive collection of artifacts from the French Emperor Napoleon I. He also did his best to see to it that business in Monaco operated smoothly and got rid of Camille Blanc who had long administered the Monte Carlo Casino but who had acquired a very questionable reputation. Prince Louis II also fostered the performing arts, ballet and opera and in 1939 built the Prince Louis II Stadium to hold the World University Games. Things might have gone quite differently for Monaco were it not for the disastrous outbreak of World War II soon after.

This conflict put Louis II in a difficult position. His grandson Rainier (son of his daughter Charlotte and her Franco-Mexican husband Pierre de Polignac) favored the Allies and was quick to join the French army and distinguish himself at the front. However, once France was defeated, Louis II was inclined to support the existing government in Vichy led by his old World War I comrade Marshal Philippe Petain. However, to add another degree of difficulty to things, at this time most of the Monegasque people still considered themselves more Italian than French and many sympathized with Italy and the dynamic leader of that country Benito Mussolini who of course had declared war on France. With France defeated there was little tiny Monaco could do but wait and see, however the divisions of opinion were deep and heartfelt.

In 1943 the Royal Italian Army marched in and occupied Monaco with many of the locals welcoming them. A new government was formed by the Italians along the fascist model but it did not last long as soon Mussolini was dismissed and as the Italian troops pulled out German troops came in to take their place. This really brought the war home to Monaco as never before. The Germans quickly began enforcing their anti-Semitic laws and deported Jews to the concentration camps including the famous Rene Blum who Louis II had previously charged with setting up the Monaco opera. Sadly, he was among the millions of Jews who lost their lives in the Holocaust. But, Prince Louis II was not the sort of man to take this cruelty and meddling laying down. At great risk to himself and his family, whenever he could obtain the necessary information he would secretly dispatch the Monegasque police to warn those about to be arrested by the Gestapo. Nonetheless, Prince Rainier was disgusted with not being able to do more to support the Allies or the Free French forces.

When Monaco was liberated in 1944 she was briefly under Allied administration which included communist representatives who would have liked nothing better than to see the near absolute monarchy of Monaco abolished. However, the old soldier in Louis II rose up and he made it clear that any effort in that direction would be met with all the fight he could muster and all such talk was dropped. At 75 he was still a force to be reckoned with. However, Louis II did seem to lose something with the Second World War and all of the problems that came with it. After 1946 he spent ever more time in Paris and it was on July 24, 1946 in Monaco that Louis II married the former film star Ghislaine Dommanget. They spent their remaining years together mostly at the family estate of Le Marchais near Paris. On May 9, 1949 Sovereign Prince Louis II died in the Princely Palace at Monaco and was buried in the family vault at St Nicholas Cathedral in Monte Carlo. He was succeeded by his grandson Prince Rainier III and his wife became H.S.H. Ghislaine, Dowager Princess of Monaco until her own death on April 30, 1991 in Paris.
Posted by MadMonarchist at 1:14 AM