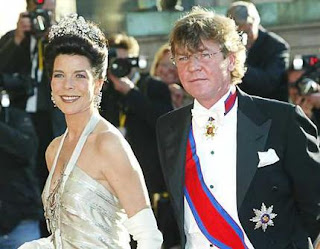 HRH Prince Ernst August V of Hanover is the husband of Hereditary Princess Caroline of Monaco and, as things stand now, could become the first Prince-by-marriage of Monaco since Jacques I. He was born on February 26, 1954 in Hanover as Ernst August Albert Paul Otto Rupprecht Oskar Berthold Friedrich-Ferdinand Christian-Ludwig Prinz von Hannover to Prince Ernst August IV of Hanover and his wife Princess Ortud of Schleswig-Holstein-Sonderburg-Gluecksburg. As the senior member of the House of Hanover (Welf dynasty) he is the male-line heir of King George V of Hanover and King George III of Great Britain and Ireland. He also holds the titles of Duke of Brunswick and Luneburg. However, although the British monarchy uses his titles as a matter of courtesy neither the governments of the UK, Ireland or Germany officially recognize them. The only existing government which does officially recognize him as such is the Principality of Monaco since the time of his marriage to Caroline. He is also a great-grandson of the last German Kaiser Wilhelm II.

In 1981 the Prince of Hanover married the Swiss chocolate heiress Chantal Hochuli by whom he had two children; Prince Ernst August and Prince Christian of Hanover. However, the couple divorced in 1997 and the Prince was linked romantically with the widowed Princess Caroline of Monaco. The increased media attention this brought was not always welcome and in 1998 the Prince was fined 30,000 pounds for bunching a cameraman, breaking his nose. He has gained a reputation over the years for being fond of the drink and getting into altercations with papparazzi and the police. It also soon became known that Princess Caroline was pregnant by the Prince of Hanover and, as she had been granted an annulment of her first marriage in 1992, the two were married in January of 1999.

Since the Prince of Hanover is included in the line of succession to the British throne he had to be given permission to marry from HM Queen Elizabeth II. Princess Caroline also had to clear the marriage with the government of France according to long-established treaties between France and Monaco. Neither side had any objection and the two were married in a civil ceremony. Even though his place in the British succession required the Queen's consent for his marriage to be legal in Britain the fact that he was marrying a Roman Catholic also meant that he lost his place in the succession as soon as he and Princess Caroline became man-and-wife. His children, however, being Protestant, retain their places. In the summer of that year Princess Caroline, since her marriage recognized by Monaco as Her Royal Highness the Princess of Hanover, gave birth to their daughter HRH Princess Alexandra Charlotte Ulrike Maryam Virginia of Hanover in Austria.

Since that time there has been plenty of fuel for the gossip mills thanks to the Prince of Hanover, from legal disputes over privacy and assault charges to public urination and intoxication. The family was given quite a scare in 2005 when the Prince was rushed to the hospital with severe pancreatitis and later slipped into a coma just a day before HSH Prince Rainier III passed away, putting a severe strain on Princess Caroline. He remained in intensive care for sometime afterward and even when released was said by the hospital to be needing continuous medial treatment from then on. In September of this year papers began to report on rumored marital problems between the Prince and Princess of Hanover. Princess Caroline left their primary residence to return to Monaco where she enrolled her daughter in school and gossip was soon flying that the Grimaldi "curse" had struck again and divorce was just around the corner. However, after a number of such stories the Princely Palace released an official announcement that the rumors were untrue and that the Hanoverian royal couple had no plans to divorce.
Posted by MadMonarchist at 1:10 AM