Christian Louis, Baron de Massy, a first cousin of the current Princely Family of Monaco, was born on January 17, 1949 to HSH Princess Antoinette of Monaco (elder sister of Rainier III) and her paramour of the time Alexandre-Athenase Noghes. Born out of wedlock he was later legitimized by the Catholic Church in 1951 when his parents married which put him in the line of succession to the Monegasque throne. As a result, as a small boy, he was at the center of the rumored effort of his mother to depose his uncle Rainier and place him on the throne instead with Princess Antoinette as regent and the real power. He had two other sisters, Elisabeth-Anne de Massy and Christine Alix de Massy but because of his gender he was to take center stage in the alleged conspiracy.
At the time Christian was legitimized Prince Rainier III was unmarried and had no children and this was supposed to be the key for Princess Antoinette to take back the place she lost when her younger brother was born. However, as we all know, Rainier III married Grace Kelly and had three children, including a son and heir, and the idea of Christian becoming "Louis III of Monaco" evaporated. Needless to say this caused problems within the ranks of the Princely Family and for a time Rainier III banished his sister from the Principality. However, according to Christian's own account, Princess Grace was always very kind to him and when the marital problems of his mother drove him to distraction he said that Princess Grace always made time for him, comforted him and tried to help him along. It should be kept in mind though that his book "Palace" was not looked on kindly by Rainier III who banned it and banished Christian himself from Monaco in 1986 for it and other problems and is widely viewed as an effort to "cash-in" on his family connections by spreading rumors.
In 2002 when the laws of succession were revised Christian again entered the ranks though as 11th in line. However, when Rainier III died and Albert II became Sovereign Prince Christian again lost his place, though if some major disaster were to befall the current crop of Grimaldis Baron de Massy would still be eligible for selection by the Crown Council. In his own life, Christian has had a tumultuous time. His family life was chaotic, he didn't do well in school and was known for his casual relationships, risky behavior and car racing. After being educated in England Christian followed in his mother's footsteps with a succession of failed marriages. First, in 1970 in Buenos Aires, Argentina he married Maria Marta Quintana y del Carril who, one year later, gave birth to Christian's first child Laetizia de Massy but in 1978 the couple divorced.
He has had three more marriages since, now married to his fourth wife, and has had two other children, sons, Brice Baron de Massy and Antoine Baron de Massy. Information on his life since writing his "tell all" book has been rather sketchy though, so keep that in mind. By and large, from what I have heard, he is still largely looked down on in Monaco. Whereas other members of the de Massy clan have made up with their Grimaldi cousins and are often seen at social events and the like, Christian is usually nowhere to be seen. 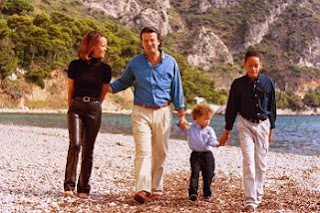 Posted by MadMonarchist at 12:53 AM