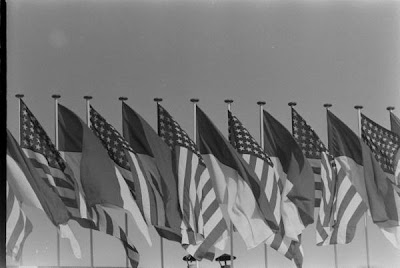 Today holds a special significance in the Principality of Monaco and the United States of America. It was on this day in 1923 that HSH Prince Rainier III was born to Princess Charlotte and Prince Pierre of Monaco and across the US those who have died in military service are honored on Memorial Day. Thankfully, none of the recent relatives of the Princely Family (on either the Monegasque or American side) have died in war but a number have seen military service. John B. Kelly Sr. (better known as Jack Kelly), father of Princess Grace and grandfather of Prince Albert II of Monaco, enlisted as a private in the US Army during World War I and by the time the conflict had ended had been promoted to the rank of lieutenant. His son, John Kelly Jr, brother of Princess Grace and uncle of the current Princely Family, served in the US Navy during World War II but was stationed in Maryland. During the war, when he was given leave, his sister Grace would drive him to and from his base and the family home in Philadelphia. Prince Albert II himself also served for one month in the US Navy as was mentioned below.
Although not remembered as part of the American holiday of Memorial Day, readers will know that there is a long tradition of military service in the Grimaldi family of Monaco. Prince Rainier III served in the French army during World War II and his father, Prince Pierre, gave a great deal of covert assistance to the Free French forces during the dark days of the occupation. Prince Louis II served with great distinction in the French army during World War I. Even though he could not serve in World War II, Louis II donned his French uniform during the war years so there would be no doubt as to where his sympathies were among the warring powers.
Posted by MadMonarchist at 12:14 AM