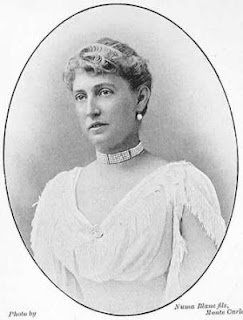 Alice Heine was Albert's second wife, and he was her second husband she having been previously married to the Duc d'Richelieu. She was an American, born in the French Quarter of New Orleans into a very rich and well-connected family. The family moved to France because of the Civil War in America where she became known in the high society circles and her family gained prestige when her father helped pay for Napoleon III's (doomed) war against the Germans. She married the Duc d'Richelieu in 1875 and after his death she married Albert I in 1889. She is said to have been the business-savy one of the couple who made Monaco economically stable. She was also a patron of the arts, opera, theater and usual things but especially the opera. She put the opera, theater and ballet of Monaco on the European map. Rumors of an affair between her and the composer Isidore de Lara enraged Albert I, though he had his failings too. The couple parted in 1902 but never divorced. Her former home in New Orleans is now the Princess of Monaco Carriage House and Courtyard and advertises itself as a setting for weddings, receptions, special parties and the like.
Posted by MadMonarchist at 4:47 PM