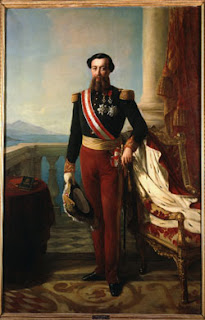 H.S.H. Prince Charles III of Monaco was born on december 8, 1818 in Paris, France as Charles Honore Grimaldi, the only son to Prince Florestan I of Monaco and Princess Maria Caroline Gilbert de Lametz. He was married to Antoinette de Merode-Westerloo in Brussels, Belgium on September 28, 1846 and succeeded his father as Sovereign Prince of Monaco ten years later on June 20, 1856. Prince Florestan had been an actor and not really prepared for his job as monarch and handed power over to his son after several proposals for a constitution were rejected, mostly because of the objections of the town of Menton. Revolutionary uprisings and money troubles caused Florestan to be eager to part with his throne and pass the buck to his son Charles. He inherited a larger principality than we know today but one extremely strapped for cash and the first order of business for Charles III was to find some way to bring income to Monaco. The idea finally came to him to open a casino in Monaco as there was, at that time, no other centers of gambling in southern Europe and there were plenty of high-rollers who would go seemingly anywhere to play the odds and take their chances. He converted a villa and agreed to let the new establishment be named after him and so the famous Monte Carlo casino was born.

At the start the casino bore few similarities to the glamorous affair we know today. It was described as rather drab and did not, at the outset, bring in a great deal of money for the principality. Nonetheless, the ground-work has been laid for what would prove to be the mainstay of the Monegasque economy for many years to come. However, the establishment of the casino was met with some staunch opposition by the Catholic Church in Monaco, especially the Jesuits. The Society of Jesus had established a monastery and a private school for the offspring of the elites of Monaco society and they had been forced to relocate while their original property was being refurbished. However, they were greatly disturbed by the opening of the Monte Carlo casino and demanded that they be refunded the money put into their property near the new casino.

Prince Charles III, having to deal with his own financial problems and a large part of his country on the edge of rebellion, had little patience for the Jesuits and their moral concerns about the new casino. When the Society of Jesus tried to take Charles III to court he had the order expelled from his principality; another example of the age-old fact that it never pays to challenge the boss. However, probably the biggest concern Charles had was the political situation he faced with France. The towns of Menton and Roquebrune had been taken by the French during the revolution but later restored to Monaco which was then under the protection of the Kingdom of Piedmont-Sardinia. However, during the Revolutions of 1848 Menton and Roquebrune had risen up and declared themselves free cities though still under Sardinia. The Savoys were also at the time making territorial concessions to the French Emperor Napoleon III in return for his support against the Austrians. The two nominally Monegasque towns were in a political no-man's-land because of all this confusion but the matter was finally resolved when the Menton and Roquebrune areas voted by a large margin for annexation to France in 1860. Prince Charles III could do little to stop the development and France did agree to pay him compensation for the loss of these territories which constituted some 80% of the total area of the Principality of Monaco.

In spite of this tremendous loss, which was probably inevitable, the road was open for the French to recognize the independence of Monaco, which eventually led to the current French protectorate. Prince Charles III also made a considerable contribution to making Monaco more open with the outside world. In 1864 Charles III signed a Treaty of Friendship with Muhammad III as-Sadiq, the Bey of Tunis, which regulated trade and maritime relations between the two countries. He also established diplomatic relations with many other governments around the world for the first time. On the whole, the reign of Prince Charles was a beneficial one for Monaco. He inherited immense problems and was able to handle them, he also took steps to strengthen the principality in the long-term. He died at Chateau de Marchais on September 10, 1889 and was succeeded by Albert I.
Posted by MadMonarchist at 12:12 PM