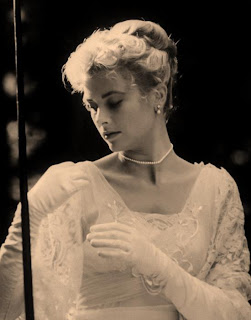 Throughout her years as an A-list actress and finally Princess of Monaco there was no doubt that Princess Grace set the standard for style, class and glamour around the world. Yet, she was not born into the world royalty and the Hollywood elite. She was born Grace Patricia Kelly in Philadelphia, Pennsylvania on November 12, 1929 to the son of Irish immigrants Jack Kelly and wife Margaret. Her father gained some measure of fame for being a three time Olympic gold medal winner sculler. He was a self-made millionare and owner of the largest brick business on the east coast. He once ran for Mayor of Philadelphia on the Democrat ticket but narrowly lost the election. During World War II President Franklin D. Roosevelt made him the National Director of Physical Fitness. Grace was named after a late aunt as per the wishes of her late grandmother. She had one older sister, one older brother and one younger sister.

Grace became a model early in life and as early as 12 was acting in plays and learning to sing and dance. Rejected by Bennington College because she wasn't good at math she threw herself totally into becoming an actress and soon she was attending the American Academy of Dramatic Arts in New York. Even though the class was full she impressed her interviewer enough to to a place in the school where such famous names as Katharine Hepburn and Lauren Bacall studied. After working in the theatre she later made the move to television and finally the big screen.

Among Kelly's many screen performances were roles with Gary Cooper in High Noon, Hitchcock's Dial M for Murder and with Bill Holden in The Bridges at Toko-Ri. She also starred with Bill Holden and Bing Crosby in The Country Girl for which she won an Oscar. She had previously worked with Bing Crosby as well as Mr. Frank Sinatra and Louis Armstrong in High Society as a sophisticated heiress about to remarry.

For many fans of the time as well as later generations (such as myself) Grace Kelly became the quintessential movie star, the picture of the highest ideal of Hollywood actresses. It was to be her last film role and was released shortly after her marriage. That part of her life began in 1955 when she met His Serene Highness Prince Ranier III of Monaco while attending the Cannes Film Festival. The two began corresponding and shortly thereafter Prince Ranier came to America and visited with the Kelly family for three days, finally asking Grace to marry him. Everything was moving fast and as soon as all was settled the Kelly family began planning what was termed the wedding of the century set for April 19, 1956. It certainly was that and in the opinion of this writer there has never been a more picturesque royal bride than Grace Kelly.

Thirty million people watched the wedding of Princess Grace and Prince Ranier on television and it was the begining of a very public life for the princely couple. They certainly wasted no time in ensuring the succession for the next generation as almost nine months to the day after their wedding Princess Grace gave birth to their first child, Caroline, on January 23, 1957. There was a 21-gun-salute, a national holiday and champagne for everyone in celebration. A year later Prince Albert was born and on February 1, 1965 Princess Stephanie joined the family. Princess Grace was a proud mother but still missed her acting career which was a real sacrifice to give up. Many filmmakers tried to tempt her out of her retirement but Prince Ranier was adamant that acting in movies was incompatible with his wife's duties as a Princess of Monaco. However, Princess Grace was able to do some narration work and on-stage poetry readings. For the most part though she devoted her time to her duties for Monaco.

Princess Grace did a tremendous amount of charity work and established the Princess Grace Foundation to support local artists. She also did a great deal of work for children and orphans in particular, holding a lavish Christmas party every year for their benefit. Princess Grace was also one of the first celebrities to support La Leche League which advocates breastfeeding rather than formula for babies.

There were numerous activities Grace undertook to raise the national profile of Monaco and in that campaign she certainly succeeded in a big way. Monaco had long been known by the elites of Europe, even moreso during the reign of Prince Ranier but Princess Grace brought the tiny principality to a whole new level on the world stage thanks to her American, Hollywood background and her charm and class that turned heads every-where she went. Through it all she also remained a very devoted Catholic mother.

As much as I hate to do it I will also at least mention that, like any famous actress, she did have her share of gossip to deal with about her love life over the years, even an attempted courtship by the Shah of Iran. Grace turned him down but remained a loyal defender of the Shah for the rest of her life. She was romantically connected with various celebrities and most often her co-stars. However, in my opinion most of that was innocent, a great deal more was invented later by those wishing to connect themselves with the bright star that was Princess Grace and she came from a solid Catholic family and was always aware that she had to avoid any hint of scandal. It is also undoubted that she was a loyal wife and mother.

Many people then and now compared the life of Princess Grace to a fairy tale. Sadly, it was to be a tragedy without the happy ending common to fairy tales. On September 13, 1982 Princess Grace and her youngest daughter Princess Stephanie were driving back to Monaco from their country estate when she suffered a massive stroke, lost control of the vehicle and plunged over a cliff on the winding road. Princess Stephanie suffered minor injuries but Princess Grace was barely alive when she was pulled from the wreckage and rushed to hospital in Monaco where she died of her injuries the following day. A requiem mass was held at St Nicholas Cathedral in Monaco which was attended by 400 close friends, family members and representatives of foreign governments and royal houses. Diana, Princess of Wales, represented the British Royal Family and a eulogy was given by her close friend and former co-star James Stewart. She remains one of the most widely admired women in the world, an icon and a legendary figure in the Old World and the New who will never be surpassed.
Posted by MadMonarchist at 10:15 PM