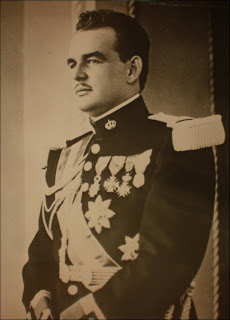 Few other Monegasque rulers have had the impact on their tiny country that Rainier III has had. From the controversy surrounding his succession to the constitutional and government changes enacted during his time there have been a great many changes for Monaco during his reign. The country experienced unprecedented growth and prosperity during his time on the throne and a tiny principality relatively few people had heard of at the time he became sovereign prince was known all around the world by the time of his passing. At more than 50 years on the throne he was one of the longest reigning monarchs in the world, second only to the King of Thailand. Everyone in Monaco, in one way or another, owes something to Prince Rainier III.

It was on May 31, 1923 that Rainier Louis Henri Maxence Betrand Grimaldi, Count of Polignac was born to Prince Pierre, Duke of Valentinois and Hereditary Princess Charlotte, Duchess of Valentinois in Monaco. His mother was born in Algeria as the illegitimate daughter of Prince Louis II of Monaco and Marie Juliette Louvet. His mother was later legitimized in a controversial situation and made heir-to-the-throne of Monaco at a crucial time when France was worried about Monaco passing to a German noble. His father, a nobleman of French and Mexican descent, took the surname of his wife, Grimaldi, and eventually his mother, Hereditary Princess Charlotte, renounced her controversial place in the succession in favor of her young son Rainier. He was educated in England, Switzerland and France before following in the footsteps of his grandfather and becoming an officer in the French army.

When World War II broke out the Principality of Monaco was very much divided. Ranier, like his grandfather, favored the French but Louis remained close to Marshal Petain and the Vichy regime while Rainier was sympathetic with the Allies. Meanwhile, many of the people in Monaco, mindful of their Italian roots, favored Mussolini and the Italian cause. Rainier served as a second lieutenant in the French army during the initial German invasion where he quickly earned a reputation for great courage and heroism. He performed so well in the German invasion of Alsace that he earned the Croix de Guerre, Bronze Star Medal and was made a knight of the Legion of Honor. After his mother passed her succession rights to him in 1944, upon the death of Prince Louis II, he became Rainier III, Sovereign Prince of Monaco on May 9, 1949. Probably due to the controversy surrounding his mother and grandfather everyone quickly began to focus on who Rainier would marry and how he would secure a more smooth succession.

The most prominent romantic connection Rainier had by the time he came to the throne was with the French film star Gisele Pascal who he lived with in Paris for a number of years before the two broke up. There were rumors that this was because she was declared infertile but she later had a child. Rumors abounded as to who the young, handsome prince would marry and he made every list of the most eligible bachelors in Europe. Then, at the Cannes Film Festival in 1955 he met the American actress Grace Kelly. After a whirlwind courtship of less than a year he proposed three days after meeting with the Kelly family while on a trip to the US. Millions watched the civil and religious wedding ceremonies in what was declared the "wedding of the century". Rainier cut a dashing figure in his uniform and medals but all eyes were on the beautiful bride, already an international super-star.

The Prince wasted no time in doing his duty for Monaco and after a long honeymoon cruise Princess Grace was pregnant and gave birth to daughter Caroline almost 9 months to the day of the wedding. On March 14, 1958 the people of Monaco breathed a little sigh of relief when a son, Albert, was born to the princely couple. In early 1965 the boy was followed by little sister Stephanie. Rainier, of course, had to deal with government as well as family matters and he occupied himself with a huge agenda of things he wanted to accomplish for Monaco to bring the principality more into the modern world by expanding their economy, bringing about greater diversity and enacting constitutional reforms to streamline and modernize the government. For a long time Monaco had been economically stagnant, largely ignored in the region and known almost only for her luxurious gambling facilities. Rainier III would change all of that.

The treasury of Monaco was all but empty when Rainier took the throne and thanks to World War II the number of aristocratic high-rollers the Monte Carlo casino had depended on were few and far between. The Prince recognized from this that it was too dangerous for Monaco to have almost her entire economy dependent on the gambling industry and he would work to change that. He was also aided by his wife, Princess Grace, in improving the reputation of Monaco and gaining a higher international profile for the tiny country. By simply marrying Princess Grace, it could be argued, Rainier III did more than anyone in history to bring attention, style and glamor to the principality. Rainier also worked to better advertise Monaco as the ideal place to base your business. The lack of taxes was played up to encourage more and diverse businesses to settle in Monaco and so expand their economy. In all of this Rainier III was hugely successful as can be seen by one set of numbers. When he became Sovereign Prince of Monaco gambling accounted for 95% of the income of the country. By the time he died, gambling was only 3% of the total income of Monaco; a state of affairs that has made Monaco much more economically stable.

Accomplishing this also meant drawing more international tourism to Monaco and breaking the hold of shipping tycoon Aristotle Onassis which Rainier did by 1964. The many undertakings of Princess Grace helped to bring more and diverse groups to Monaco as did the love Rainier III had for sports, especially football and Monaco became the longtime host of the European Super Cup. Rainier III also saw to it that the government of Monaco was reformed and started by suspending the old constitution in 1959. Ironically enough, it was the somewhat more autocratic power he enjoyed under the old system that enabled him to do so and in 1962 a new and more liberal constitution was put into effect which, among other things, reduced the power of the monarch and put more in the hands of the elected National Council, abolished the death penalty, gave women the right to vote and established a Supreme Court to guard the rights and liberties of the Monegasque people.

In 1982 disaster struck the prosperous and glamorous principality when Princess Grace died from injuries sustained in a car accident while returning to Monaco with their youngest daughter Princess Stephanie. The Grimaldis, Monaco and many people all around the world were thrown into a fit of sorrow by the loss of the beloved princess. Rainier had lost a strong right arm with the death of Princess Grace and things would never be the same again, particular for the inner workings of the family. Rainier had considered her the ideal wife and would never remarry. However, he remained a very devoted father and a very proud grandfather, displaying a level of public affection with his grandchildren rarely, if ever, seen among the other crowned heads of Europe. He was, of course, also very much aware that in spite of the playboy reputation of his son Albert, the heir to the throne had not married and started a family nor did he seem very likely to in the near future and this, as in any monarchy, was a cause for some concern.

In 2002, over fears that Monaco might lose her independence to France if Albert were to never marry and produce heirs, the succession was changed so that not only the direct descendants of the reigning prince could inherit the throne. However, the old freedom to adopt an heir was removed but the agreement ensured that Monaco would remain independent no matter what happened to the princely family and removed the threat of a vacant throne. Prior to this some assumed that Albert would adopt his nephew Andrea Casiraghi as his heir, but it is now assured that his older sister while follow him on the throne if he dies without legitimate issue. It was a timely action as about the same year Prince Rainier III began to show more signs of his age and ill health. By 2004 the Prince was hospitalized with heart problems. Prince Albert later said he was fine other than a bad case of bronchitis but in 2005 he was hospitalized again with a lung infection.

Through it all Prince Rainier kept up his sense of humor and as he was the second longest reigning monarch in the world after King Rama IX of Thailand reportedly asked his valet every morning upon waking, "Has Rama survived the night? Or did I just move up in the ranks?" Toward the end of March he was moved to the critical care unit of the hospital and had to be placed on a ventilator for renal and heart failure. At the end of the month the Crown Council announced that Prince Albert had been named regent for his father due to Rainier's poor health and the reports of his doctors that he was unlikely to recover. Early on the morning of April 6, 2005 it was announced that Prince Rainier III had died at the age of 81 at which time his son became Sovereign Prince Albert II of Monaco. The occasion would likely have been a media frenzy were it not for the fact that Pope John Paul II died just prior to the Prince. Rainier III himself was one of the last Catholic monarchs still reigning in Europe and included among his many foreign orders and decorations the Papal Order of the Golden Spur. He was buried on April 15, 2005 in the national Cathedral of St Nicholas in Monaco beside his beloved wife Princess Grace.

It would be hard to overstate the importance of the reign of Prince Rainier III on Monaco. Few would have recognized the country he left from the one he inherited. When he came to the throne the succession had been shaky, the country was poor and seemed to many observers to have passed its most glorious days. Rainier III changed all of that. He diversified the economy, secured the succession, raised the prominence and prestige of his country, brought greater attention and new business as well as greater freedom and prosperity to his people. Instead of a has-been center of elite gambling, Prince Rainier III left Monaco a country known and famous around the world as a wealthy, glamorous hot spot that was just as famous as a friendly base for business, tourism, charity and sporting events as it was for its lavish casinos. Monaco is what it is today largely through the efforts and steady leadership of Prince Rainier III.
Posted by MadMonarchist at 4:27 PM