Albert and Charlene Out & About 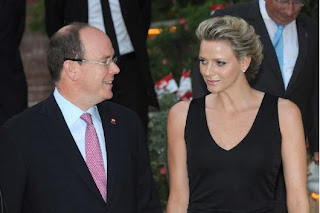 HSH Prince Albert II of Monaco and girlfriend Charlene Wittstock have been quite the pair lately, taking in a number of events together in the last few days. There was Albert's inauguration as one of 40 new "protectors of the jury"; that is an unofficial ambassador for the wine industry of Bordeaux which was followed by an excursion to a scenic French beach at St. Tropez which (from the photos) was obviously "clothing optional" but Albert gallantly shielded a blushing Charlene from some of the more "unsightly" views. Most recently the pair attended the 13th FINA World Championship at Foro Italico Swimming Complex in Rome, Italy yesterday. All these photo-ops together have, of course, set some gossiper tongues wagging, but cooler heads will remember that we have seen the like before though it is probably safe to say that no other woman so far as been so prominently featured at official events with the Sovereign Prince as his past associations. What can be said with certainty is that none of the talk has had the slightest effect on Albert II who continues on his own path at his own pace.
Posted by MadMonarchist at 12:47 AM