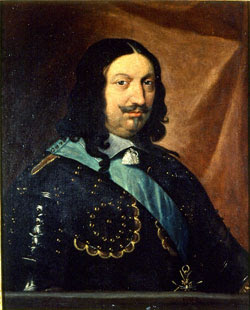 Honore II was the first Grimaldi to officially be titled as “Prince of Monaco”. He was the son of Lord Hercules I of Monaco, who was the brother of Lord Charles II, and Maria Landi. During this period Monaco had fallen within the Spanish sphere of influence which was often heavy-handed and causing considerable discontent among the Monegasque. There had also been numerous attacks and conspiracies against Monaco originating from Provence or the House of Savoy. In 1604 Lord Hercules I was assassinated and Honore II, who was only 6-years-old, became Lord of Monaco. Because of his age he was acted for by his uncle Frederico Landi, Prince of Val di Taro, who was very much a Spanish partisan and the year after Honore’s succession he allowed Monaco to be garrisoned by even more Spanish troops.

The people of Monaco were disarmed, forbidden to carry weapons and young Honore and his two sisters had to relocate to Milan for a time. Needless to say the regent became very unpopular amongst the Monegasque and the ruling Council of Monaco tried to limit Spanish influence but there was little they could do. The Spanish did try to maintain good relations with the young Grimaldi monarch, granting him the Order of the Golden Fleece. They also confirmed the title of Prince for Honore II, which had been used before but simply as a courtesy. Now it was official making Honore II “Prince and Lord of Monaco“. However, these outward displays did not appease the people who were outraged by the abolition of communal prerogatives by the regent Landi. The Spanish also encourage Honore II to mint his own coinage but more or less hinted that he should be content to entertain foreign guests and live a life of idle luxury while they and their supporters ruled Monaco.

Honore II did take the advice of the Spanish -but only to some extent. He made Monaco a haven for poets, artists, musicians and so on. Monaco’s Princely Palace gained a reputation across the civilized world as a center of great culture and learning. The art collection of Prince Honore was one of the most respectable in Europe. However, that sparkling reputation ran headlong into ugly reality in 1631 when a plague swept the tiny country, supposedly spread by some infected linens from La Turbie that had been brought to Monaco for washing. Strict quarantine laws were put into effect, forcing people to remain in their homes and forbidding any congregating and most social interaction. However, some monks finally arrived from Nice and announced that the cause of the disease was nothing fancier than dirt and led practically the whole population to the seaside for a huge, national mass-bath. People brought their clothes and their furniture and washed them as well. Homes were scrubbed and fumigated and a cleansing rain even fell to help matters and as the monks had promised the plague lifted.

Meanwhile, Honore II was planning big changes for Monaco; the most important of which was the desire of the Francophile Honore II to take Monaco out of the grip of Spain and ally with France. The situation was growing increasingly critical. At one point the Spanish troops occupying Monaco asked permission to pillage the Princely Palace they were officially there to protect because their had been in arrears for so long. Working secretly Prince Honore II negotiated the Treaty of Peronne with France’s famous Cardinal Richelieu acting on behalf of King Louis XIII. The treaty stipulated that Monaco become a French protectorate but that the independent status of the Prince should remain and that he be granted compensating lands in France for any potential losses he would suffer in breaking away from Spain. French troops were to garrison Monaco but the officers in charge would be answerable to the Prince of Monaco rather than the French authorities. Most importantly Monegasque independence was to be maintained.

On November 17, 1641 Honore II carried out what was effectively a coup in his own country against the Spanish. He quickly arrested numerous individuals known to be in league with the Spanish and that evening threw a lavish banquet for the Spanish troops and their officers. The soldiers were given generous quantities of liquor to take the fight out of them and then, at a given moment, a canon shot signaled an attack as the Monegasque sprang on the Spanish and French troops came rushing out of their hiding places to overwhelm them and force their surrender. With only 5 killed and 10 wounded the Spanish gave up and Monaco had officially changed camps. Prince Honore II published an official document to the great powers of Europe explaining why he had done what he did and he also returned his Order of the Golden Fleece. As expected the Spanish confiscated all of the Prince’s property in Spain and rescinded all of his privileges and honors but the French would make good the loss.

Part of that compensation was when Louis XIII made Honore II the Duke of Valentinois, Count of Carladez, Baron of Buis and Calvinet as well as the lands and title of St Remy. The monarchs of France and Monaco became so close that in due time King Louis XIV would stand as godfather to Honore II’s grandson who was also named Louis. One of his last tasks was a diplomatic balancing act with the exiled British House of Stuart. The French were natural allies of the Jacobites and Charlotte de Gramont, wife of Honore’s heir Louis of Monaco, was a close friend of the widowed Queen Henrietta Maria. James, Duke of York (later King James II), wanted to assemble a fleet in Monaco for the invasion of England and restoration of the monarchy. The powerful Cardinal Mazarin, however, was anxious to make peace with the Commonwealth of Oliver Cromwell and enlist his help against the Spanish. So, he instructed Honore II to give every courtesy to the Duke of York but not to allow any hostile force to embark from Monaco. Honore did his job well and, though the Stuarts were disappointed, everything worked out to Mazarin’s satisfaction. Prince Honore II died on January 10, 1662 a very popular and successful monarch. He had removed them from being under the heavy hand of Spain and kept the country independent while allied to the powerful French. His cultural achievements and the prestige he gained led him to be known as the “Louis XIV of Monaco”.

Posted by MadMonarchist at 6:12 PM