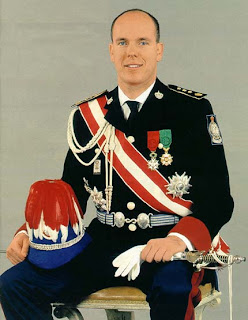 The present reigning Sovereign Prince of Monaco is Albert II, second child and only son of Prince Rainier III and Princess Grace. He was born Albert Alexandre Louis Pierre Grimaldi on March 14, 1958 at the Princely Palace in Monaco. As a boy he attended the Albert I High School and graduated in 1976. For six summers he worked as a camp counselor at Camp Tecumseh on Lake Winnipesaukee at Moultonborough, New Hampshire. He later attended Amherst College where he studied a variety of subjects to prepare him for his future role as reigning prince and he graduated in 1981 with a BA in political science. He also studied economics in an exchange program and demonstrated his love of athletics with his participation in a wife variety of sports. He would eventually become most known for his place on the Olympic bobsled team for Monaco. Over the years he would compete in five winter Olympics. The public was impressed when they learned they lived exactly the same as the other athletes, in the same Spartan conditions with no special treatment.

When Princess Grace died in 1982 the world mourned and everyone watched to see how the family would cope with the loss. Friends and royal watchers began to observe that there seemed to be quite a bit of Princess Grace in Hereditary Prince Albert. Those who knew him were unanimous about Albert being a kind and compassionate man, the nicest guy in the world many said. His buddies also claimed that he was quite the ladies man and had girls at the top of his list of interests, however, everyone was impatient that he settle on one girl, get married and start a family. To the consternation of people around the world Albert showed absolutely no interest in marriage. With the loss of Princess Grace it was no secret that Rainier III was in despair and there were rumors that he planned to abdicate as soon as Albert got settled. Needless to say, Rainier III never abdicated.