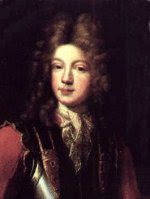 Louis I may not have been one of the most "hands-on" sovereigns of Monaco but he was certainly one of the most interesting, accomplished and stylish. Louis was born in Monaco on July 25, 1642 to Prince Hercules and Princess Aurelia Spinola of Monaco but the greatest influence on his life was his grandfather and predecessor the Sovereign Prince Honore II. Since 1524 Monaco had been a protectorate of the Kingdom of Spain but that had begun to change during the reign of Prince Honore II who was a zealous Francophile. After building up the principality Honore II drove out the Spanish and made Monaco a protectorate of France in return for which he was awarded titles in the French nobility. As part of his campaign of goodwill toward France Honore II sent his grandson Louis to represent him at the lavish court of the French king where he proved to be quite popular. In 1660 Prince Louis married Catherine-Charlotte de Gramont, daughter of Antoine III de Gramont, who was a Marshal of France. 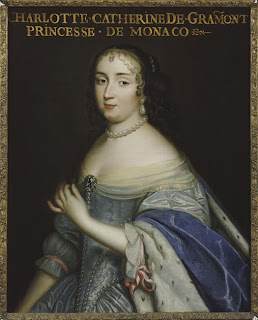 Prince Louis was an accomplished soldier who fought for King Louis XIV in his wars against England and Spain. Louis had the unique position at the French court of being both the representative of a foreign power, the Principality of Monaco, as well as a member of the French nobility as the second Duke of Valentinois. In 1662 Honore II died and his grandson succeeded him as Sovereign Prince Louis I but he spent most of his time in France, usually in Paris or at the court of King Louis XIV at Versailles. Another reason for his good graces with Louis XIV was probably the attractiveness of his wife Princess Catherine-Charlotte who, for a few months, joined the ranks of the many mistresses of Louis XIV before he moved on to the favors of the famous Madame de Montespan. Prince Louis I, himself not exactly a chaste man, prudently made himself scarce during these periods, going off to war for Louis XIV.

Although he may have been popular in France, Louis I of Monaco was not such a big hit in Great Britain which he visited in 1677. King Charles II was outraged by the way Louis I showered gifts on Hortense Mancini, one of the many mistresses of Charles II. He later fought against England in the War of the United Provinces and earned further favor with Louis XIV for his bold leadership on the battlefields of Flanders and Franche-Comte at the head of his regiment the Monaco Cavalry. Personal tragedy struck in 1678 when Princess Catherine-Charlotte died at the age of 39. She had, however, given Louis I six children; two sons and four daughters so the Monegasque succession was quite sure for the time being. In any event, Louis XIV was so impressed by the distinguished service of Prince Louis I of Monaco that he decided to name him as his official ambassador to the Holy See. It was a very reasonable move since Louis I's Grimaldi family ties in Genoa and across Italy would serve him well while in Rome.

It was in Rome at the papal court that Louis I could have made his greatest impact on history as he was chosen for the important assignment with the intention of representing the interests of Louis XIV in the critical issue of the Spanish succession. It was Louis I of Monaco who tried to bring about an agreement between the two bitter sides of what would prove to be a very costly war. Typically for a Monegasque prince though, when not engaged in diplomatic work, Louis I was well known for his stylish entertaining and lavish lifestyle. Unfortunately for his successors he went rather too far and was soon forced to sell off the awesome art collection of Honore II to pay his debts. He spent his family into the poor house to the point that Monaco was virtually bankrupt and, unfortunately, Louis I died before the issue of the Spanish succession could be settled on January 3, 1701. Had he succeeded in arranging an international agreement on Spain to the favor of King Louis XIV he almost certainly would have earned great rewards for himself. As it was, he left the Monegasque throne to his son Prince Antoine with nothing but empty pockets and a reputation for grand parties and military glory.
Posted by MadMonarchist at 11:43 PM

Email ThisBlogThis!Share to TwitterShare to FacebookShare to Pinterest
Labels: Louis I, prince of monaco, sovereign