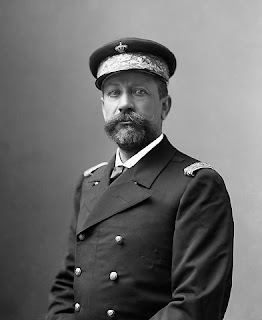 Today HSH Prince Albert I is often hailed for his adventurous expeditions to the polar regions, scientific and environmental interests, but he is, in fact, simply following the example of one of his predecessors on the Monegasque throne; HSH Prince Albert I. He brought attention to many of the same issues that Prince Albert II is addressing today. He was born Albert Honore Charles Grimaldi on November 13, 1848 in Paris, France to HSH Prince Charles III of Monaco and the Belgian Countess Antoinette de Merode-Westerloo. Throughout his life Albert was to display a fascination with the sea in both military and civilian life as well as an admirable intellectual curiosity. His first experience as a professional sailor was with the Royal Spanish Navy. As with the heir to any monarchy it was never too soon to think about marriage and family and Prince Albert had some powerful figures backing him up in that endeavor.

The main force plotting for a good match for Albert was his grandmother, Princess Maria Caroline Gilbert de Lemetz; wife of the late Prince Florestan I of Monaco. She set her sights fairly high and first hoped for a marriage between her grandson and Princess Mary Adelaide of Cambridge, a cousin of HM Queen Victoria of Great Britain. When she met with no success on her own she enlisted the aid of Emperor Louis Napoleon III and Empress Eugenie of France. Perhaps being a bit more realistic the French Emperor assured Princess Caroline that Queen Victoria would never allow one of her cousins to marry a Grimaldi who would not have been considered of sufficiently high status for the British. The Grimaldis being Catholic did not help them in the eyes of Protestant Britain either. Instead, Napoleon pointed the Princess toward the sister of his friend the Duke of Hamilton; Lady Mary Victoria Douglas-Hamilton. While not royalty she was well off, well connected, the daughter of a duke and third cousin to the French emperor. With little regard for the feelings of those involved Princess Caroline forged ahead in arranging the match; already hearing wedding bells for her grandson in her head.

Hereditary Prince Albert met his bride-to-be in August of 1869 at a ball hosted by the French Imperial Couple and by September 21 the two were married and by the next year the Princess had given birth to a son and heir; Louis Honore Charles Antoine Grimaldi. It was to be a pivotal year for Prince Albert as it was little more than a week after the birth of Louis that the Franco-Prussian War broke out and Prince Albert was quick to enlist in the French Imperial Navy where he served with distinction and was awarded the Legion of Honor. Of course, the years of 1870-1871 were disastrous for the French, witnessing their humiliating defeat, the fall of the Second Empire, revolution and the siege of Paris. Prince Albert I left with a lasting horror of war and found little comfort waiting for him at home. His teenage bride was dissatisfied with virtually everything around her. She detested Monaco and felt no great love for her husband either. Not long after Louis was born Princess Mary took her son and abandoned Monaco. A divorce quickly followed and on July 28, 1880 Reigning Prince Charles III ordered the marriage dissolved and an annulment was obtained from the Vatican with the special allowance that the legitimacy of Prince Louis would not be effected so that the succession would not be endangered and he could inherit the throne of Monaco in his turn.

Putting his military career behind him, Albert devoted more time to his longtime fascination with oceanography. This was the area in which he was to have the greatest influence on history as he was extremely gifted in the new field of study and personally developed several new techniques and instruments for measurement and exploration at sea. He studied hard and over time would make Monaco an international center for oceanography. He worked alongside numerous scholars, scientists and assorted leaders in the field and eventually founded the now famous Oceanographic Institute of Monaco with an aquarium, museum, library and research facilities in Paris. Prince Albert went on a number of exploration and study voyages and is credited with discovering the Princess Alice Bank at the Azores in 1896 (Princess Alice was the name of his ship on the voyage). Nor did he devote all of his intellectual curiosity to marine matters. While on land he spent a great deal of time studing the origins of humanity and he founded the "Institute for Human Paleontology" that sponsored a number of archeological expeditions. In 1909 all of his scholarly efforts were recognized by the international community when he was made a member of the prestigious British Academy of Science. By that time, Albert already had an additional new job.

Following the death of his father Charles III in Paris, Albert succeeded to the Monegasque throne on September 10, 1889. Later that year the new reigning Prince Albert foreshadowed the actions of a future Prince of Monaco when he married the American Marie Alice Heine, Dowager Duchess of Richelieu. A German-Jew from New Orleans, the daughter of a building contractor, Marie Heine had married the French Duc d'Richelieu but was widowed by the age of 21 with a young son Armand. The union was as much a success as the Prince's first marriage had been a failure. Princess Alice proved to be good for Albert and good for Monaco as well. With her background she was able to bring a new level of good business sense to the principality that her more scholarly husband found to be of great value. She went to work on the books and greatly strengthened the Monegasque economy which was much more volatile then than it is now. However, she was not entirely concerned with economics and after getting things sorted out on the business front was able to focus more on the traditional role of Monegasque consorts which was the cultural front and adding more style and sophistication to the tiny country. She was a patron of the opera, theater and the ballet which became quite famous under the direction of the Russian impresario Serge Diaghilev. This does not mean that Prince Albert I was a "hands-off" ruler by any means, but his wife was a strong right-arm in his duties.

This made it all the more surprising when this latest marriage did not work out either. People were shocked considering how good for the principality the match had been, however, as the public and royals alike are constantly reminded, marriages are about more than just practicality. In 1902 the princely couple separated but did not divorce and the two never had any children so there was, at least, no complications there. So what was the cause of the separation? As usual we have only gossip to rely on. It was rumored that Princess Alice had been having an affair with the composer Isidore de Lara. Supposedly this led Prince Albert to become so enraged that he slapped his wife in public at the opera one evening. Princess Alice was also rumored to be an exceptionally jealous woman after she banned the courtesan Caroline Otero, better known as "La Belle Otero" from Monaco in 1897 after being seen with her husband with whom she was rumored to be having an on-again-off-again affair with since 1893. If all the rumors can be believed it would seem that neither party was completely blameless in the failure of their marriage. Princess Alice's father tried to get a portion of her large dowry back but to no avail and after the breakup Alice moved to London where she led an active social life, supported many cultural, artistic and humanitarian causes and was famous for her stylish entertaining of numerous famous individuals from writers and painters to future Prime Minister Winston Churchill. Back in Monaco Prince Albert had many pressing concerns to occupy his time.

With political tensions growing in Europe between the Triple Entente and the Triple Alliance Monaco faced an uncertain economic future. Prince Albert worked to counter this by encouraging more tourism and trying to improve the public face of his country. In 1911 he founded the Monte Carlo Rally to draw racing fans to Monaco who would, hopefully, spend some time and money in the casino while they were there. He also granted Monaco a constitution that same year but was careful to make sure it did not limit his monarchial authority and in any event it did not last long and was suspended with the outbreak of World War I. That disastrous event was a particularly painful turn of events for Prince Albert. He was a veteran of the French military but also had among his many foreign decorations the Order of the Black Eagle of Prussia (the dominant state in the German Empire). However, his own taste of war and his life experiences had, by 1914, turned Prince Albert into an avowed pacifist. To his credit, unlike other pacifists, Albert did not stop at words and took action to do what he could to try to avert war. He set up the International Institute of Peace in Monaco in the hope that countries would talk through their problems there rather than resorting to military force. He also spoke directly with German Kaiser Wilhelm II to try to dissuade him from taking military action against France but it was, obviously, to no avail.

After the outbreak of World War I Prince Albert was neutral but not totally uninvolved and felt a great deal of sympathy for the people of Belgium and northern France who were suffering under German occupation. Again, he contacted Kaiser Wilhelm II directly to urge him to restrain his forces, particularly General Karl von Bulow, in their treatment of the conquered populace. As a result of his strong actions he was able to save two villages in Alsace from probable annihilation by the German forces. Prince Albert also provided humanitarian relief to the Allied soldiers in the form of hospitals and convalescent centers and his own son, Prince Louis, served in the French army during the war with great courage and heroism, eventually becoming a general. After the war the tourist-based economy of Monaco was in bad shape with little anyone could see to be done to help. With the world calming down the Reigning Prince was again recognized by the international community for his many contributions to the scientific and marine exploration fields. The American Academy of Science have him a medal for his life's work in 1920 and the following year the Explorer's Club made him an Honorary Member; their highest level of membership. Only one year after that, on June 26, 1922, Prince Albert I of Monaco passed away in Paris at which time he was succeeded by his son Prince Louis II. Despite the problems in his private life Prince Albert had been a very able monarch for Monaco. Thanks to him the country enjoyed a better reputation as a center for intellectual study and peaceful diplomacy as well as arts and culture rather than simply being known only as a gambling escape for the wealthy of Europe.
Posted by MadMonarchist at 3:25 AM

Email ThisBlogThis!Share to TwitterShare to FacebookShare to Pinterest
Labels: Albert I, prince of monaco, sovereign