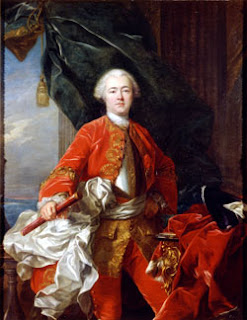 Prince Honore III was born on November 10, 1720 and after coming to the Monegasque throne in 1733 he reigned for nearly 60 years; one of the longest reigns in European history. He came to the throne just after turning 14 when his father, Prince Jacques I, abdicated and so he was acted for be the Chevalier de Grimaldi who ruled quite capably in the minority of the young prince and during his extensive absences. Prince Honore III spent much of his time away on campaign with the Royal French Army fighting the English in the War of the Austrian Succession. He and his brother Prince Charles Maurice, a Knight of Malta, so distinguished themselves at the battle of Fontenoy, a great French victory, that even Voltaire was singing their praises. Honore III was wounded fighting in the French victory at Rocoux. Later, at the battle of Lauffeld he had a horse shot out from under him but earned the Cross of St Louis for his conduct and after the Peace of Aix-la-Chapelle in 1748 he was given the rank of Marshal of France.

What is interesting is that despite the heroic service of Honore III in the wars, the Principality of Monaco was neutral in the conflict and, administered by the Chevalier de Grimaldi, was assisted both French and English ships in need of help. The Austrians and Sardinians did blockade the Monegasque coast for a time and much of the countryside was pillaged by Croat soldiers of the Austrian army but French forces later cleared the region of all invaders in 1748. In 1757 Honore III married Maria-Caterina di Brignole-Sale who was descended from the Doges of Genoa. This meant a very proud family and the arrival of the bride-to-be in Monaco turned into a disaster as many of the bridal attendants were seasick and the future mother-in-law insisted that Honore III come onboard to greet his fiancé and escort her ashore. However, as a monarch in his own right, Honore III refused as it was considered a breach of protocol for a prince to go to meet someone rather than they being brought to meet him. A stand-off ensued and eventually the Genoese fleet sailed away and stopped farther up the coast before a compromise was negotiated by which the couple would meet in the middle of a bridge extended between ship and shore. Nonetheless, the two were married and in 1768 the future Prince Honore IV was born followed by Prince Joseph some years later.

In 1767 the British Duke of York was sailing from Marseilles to Genoa when he was suddenly taken ill and had to put in at Monaco. Prince Honore III quickly offered all the help he could and put his palace at the disposal of the Prince who died after 11 days in what has forever after been known as the York Room of the Princely Palace. The Duke of Gloucester and King George III were extremely grateful for the care Honore III had given their brother and sent him gifts of horses that had belonged to the Duke of York and invited Honore III to London where he went in 1768 and was received by King George with great honor and ceremony. In 1770 Honore III and Princess Maria-Caterina divorced, not surprising given the character of the pair, and she later married the Prince de Conde in 1798.

In the meantime Honore III did what he could to guide his little principality along, improving trade and the economy which was heavily dependent on growing citrus fruits such as lemons in those days. His reign also saw the establishment of the first printing press in Monaco and the first newspaper the Courrier de Monaco. However, in 1784 the Prince and people of Monaco suffered a terrible loss with the death of the Chevalier de Grimaldi though the reign of Honore III saw the births of a number of famous Monegasque who would go on to great renown in the arts such as Langld, Bosio, Alphonse de Beauchamp and so on. Monaco went through something of an age of flowering and prosperity in the years leading up to great turmoil.

Prince Honore III did take the initiative in pushing for some reforms, the most major of which was the repeal of the law that the Sovereign Prince would receive the inheritance of anyone who died on his property. On August 18, 1770 Honore saw the practice, which he viewed as barbaric, abolished. As France slipped increasingly rapidly toward revolution things in Monaco remained calm and peaceful until the fateful day of July 14, 1789; the date of the storming of the Bastille. The shock spread to Monaco where crowds embraced the Declaration of the Rights of Man, influenced by the rise of republicanism in France as well as some newly introduced nostalgia for the Genoese Republic. At the outset the mob seemed to hold now vehement ill-will against their Prince and were content to allow him to retain his palace and even role as Chief Executive, but he could only consider laws that were passed to him by a democratically elected assembly of the people.

Honore III saw no choice but to allow the major towns of Monaco to form their own assemblies. Since his actual position was not yet being threatened he was more concerned with the loss of his noble titles in France at the hands of the French National Constituent Assembly which was intent on abolishing all aristocratic privileges. However, things were quickly spiraling out of control as the revolutionary elements in Monaco grew increasingly radical and Honore III began issuing restraining edicts against them. Moods began to shift and the public that had viewed the monarchy as rather benign now began to rail against it as despotic and call for the abolition of the Principality. Yet, as things were boiling over in Monaco, Honore III rushed to Paris to try to defend his titles there before the Constituent Assembly.

It may have been a mistake but to the surprise of many Honore III was extremely convincing when dealing with the French revolutionaries. He played on the strain of nationalism then at play by reminding them that his family had been given these titles for their great deeds on the battlefield, fighting in the service of France. His estates were, therefore, not the gift of the King of France alone but payment for services rendered in the cause of French national glory. He struck just the right cord and the Assembly voted a generous pension for the Prince of Monaco in reparation for his confiscated properties. Unfortunately, before the order could be carried out canon were firing in the streets, Danton came to power and the republic was declared. In all the turmoil France lost interest in Monaco and ultimately all Honore was able to gain was a recognition from the republican government of Monegasque neutrality. Unfortunately, that was a promise that would never be respected.

The French Republic declared their expansionist policy at the end of 1792, announcing that wherever their forces marched they would destroy monarchy and impose the French revolutionary model of government. Monaco quickly fell victim to this policy and on January 13, 1793 Prince Honore III was officially declared deposed by the Monegasque National Convention and, like the good little client-state puppets that they were, immediately petitioned France for annexation. Some in France did protest on the grounds that Honore III had always been a loyal friend and ally of the French, but republican hatred of monarchy prevailed and Monaco was absorbed into the French Republic and renamed Fort Hercules.

Seeing which way the wind was blowing Honore III tried to gain the favor of the new masters of France and Monaco by monetary donations and even gifting some of his famous horses for the republican army; but it was to no avail. At the height of the Reign of Terror Honore III was arrested as was his son, Honore IV, who had been in Paris at the time and who would remain imprisoned for 15 months. His ex-wife, former daughter-in-law of Honore III, the Duchess Mazarin was also arrested but she and her son Prince Florestan were saved by their family doctor who managed to arrange their escape and hide them away. Honore III’s other son Prince Joseph and his wife Princess Francoise-Therese had left France fairly early on, leaving their children in the safe custody of some close friends. However, Princess Francoise-Therese found in unbearable to be away from her two daughters and returned to France to see them. She was quickly arrested as a ‘class enemy’ and condemned to death by the revolutionary officials. Her execution was postponed when she announced she was with child. She cut off her hair with a piece of broken glass to give to her children and wrote that she was, “a foreign princess dying through the injustice of French judges”. She was only 26 years old when she was beheaded.

Fortunately for the rest of the family most of the so-called suspects who were arrested were eventually released. Honore III had suffered greatly from his own imprisonment and after his release had to stay in his house on the rue de Varennes as the Princely Palace in Monaco had been confiscated by the revolution though, thankfully, there was no ‘Reign of Terror’ or mass arrests and bloodshed in Monaco. Overcome with sadness, suffering, a number of ailments and the ravages of old age Prince Honore III of Monaco died on March 21, 1795.
Posted by MadMonarchist at 11:56 PM