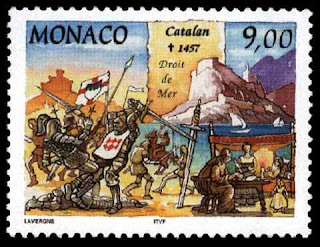 Catalan de Grimaldi was the son and heir of Jean I, Lord of Monaco, and succeeded his father upon his death in 1454. However, Seigneur Catalan de Monaco was not to last much longer himself. Considering the rules of succession his father had drawn up just before his death, it was crucial that his only child; his daughter Claudine, make a suitable marriage. It was up to Lord Catalan to see his girl married to someone of proper strength to be a leader for Monaco and also someone who was either already a relative or who would forsake their own family name and arms for that of the House of Grimaldi. Of course, an additional problem may have been the fact that Claudine was only a child (6-14 years-old depending on the source). His father had been adamant that, if at all possible, daughters set to inherit the throne should be married to another Grimaldi. Lord Catalan finally decided on a cousin; Lambert Grimaldi who was co-seigneur of Menton and whose brother Gaspar was Seigneur of Antibes.

Other than the arrangement of this marriage, paving the way for the reign of the colorful Lambert Grimaldi, the only other thing Lord Catalan is known for is repudiating the treaty his father Jean I had signed with the Duke of Savoy. After reigning for only three years he died in 1457 at the age of 42, leaving the throne of Monaco to the husband of his only daughter (he had three children but Claudine was the sole survivor). The marriage must not have seemed ideal but necessary. Lambert and his brothers had fought for Monaco already and the Antibes branch of the family was descended in a direct male line from their Genoese family patriarch Grimaldo. If little else can be said of him, Lord Catalan did ensure that, despite his own problems in securing the succession in his own line, the family would go on and Grimaldi rule over Monaco was secure.
Posted by MadMonarchist at 12:13 AM