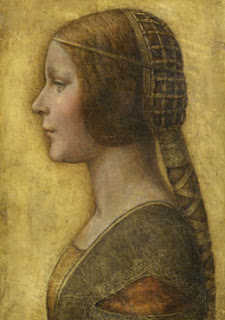 Although not always considered as a sovereign of Monaco, Lady Claudine is often listed amongst the seigneurs and princes of the House of Grimaldi. She was born probably in 1451 (according to most if not all sources) to Lord Catalan of Monaco. She was one of three children but the only one to survive and thus stood to inherit the throne of Monaco from her father but a suitable arranged marriage to another Grimaldi cousin was necessary. Imagine having your marriage discussed and negotiated when you are only 6-years-old! The choice was her cousin Lambert Grimaldi but because of her age the two could not marry right away (at least it would have made little sense to as they certainly could not have lived as husband and wife). So, though the plans were made, she was still unmarried when her father died in 1457 and, at the age of 6, Claudine became the nominal lady of Monaco.

Obviously Claudine could do very little and power was exercised on her behalf by her formidable grandmother and regent Pomelline Fregoso, wife of Seigneur Jean I. The people of Monaco, naturally desiring a stable government with an adult in charge (a man naturally at the time of course), wanted the will of Lord Catalan to be put into effect and for Lambert to take over things immediately. Well, Pomelline was having none of that and she immediately began plotting against Lambert no sooner than Catalan was cold in the ground. She had her agents pursue Lambert and capture him though whether or not she intended to have him killed or simply locked away remains unknown.

Nonetheless, it was to no avail. Lambert found out about the conspiracy and eluded his attackers even fighting off a massive raid on Monaco when Pomelline enlisted the support of Catalonia and Aragon in her effort to maintain power. However, in the end, Lambert and his forces prevailed and he had Pomelline’s supporters beaten and arrested Pomelline herself and kept under guard at her home in Menton. With that matter settled, and after a nominal reign of only about a year, Lady Claudine abdicated her position to her future husband in 1458. Seven years later, in 1465, Claudine was considered old enough to marry and at the age of 14 she wed her, by now 45-year-old, cousin Lambert.

Given the roughly three decade age difference between the two, the fact that the match was an arrangement of family politics, one might expect the result to have been a failed and unhappy marriage. On the contrary, however, despite their disparity in age the two seemed to have had a very successful marriage and Claudine gave Lambert six children; Jean (future Jean II of Monaco), Louis (disinherited on grounds of insanity), Bianca, Augustine (future Bishop of Grasse), Francoise (who married into the Doria family) and Lucien who would also become Seigneur of Monaco one day. She died on November 19, 1515 during the reign of her son Lucien, to the last trying to keep peace in the family.

*in the absence of a known portrait of Claudine I substituted this image of a girl of the same period by Leonardo de Vinci.
Posted by MadMonarchist at 1:49 AM