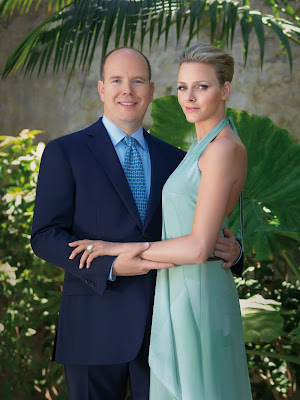 There must be something in the water in Stockholm! Though everyone assumes it was known in royal circles before then (I'm not entirely sure) but it has been announced, it is official, -yes we have confirmation this time- our Sovereign Prince has finally popped the question and is engaged to be married to Miss Charlene Wittstock. To my regular readers, I know I have not been very prompt with this news but you should all know how many times Monaco-marriage-hopefuls have been burned in the past, so, I determined to hold off until there was an official announcement from the Princely Palace and not just a report on CNN quoting French newspapers. Well, the palace has confirmed it:

More than a few people are probably saying, 'Well it's about time!' In any event, better late than never, it will be nice having another wedding in Monaco to look forward to. Congratulations and all our prayers and best wishes to HSH Prince Albert II and Miss Wittstock!
Posted by MadMonarchist at 9:54 AM