Sad Look Back, Happy Look Ahead 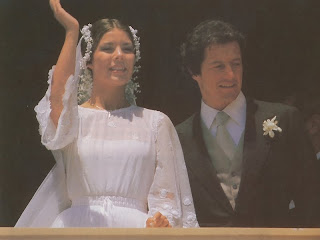 It was yesterday in 1978 that HSH Princess Caroline of Monaco made the mistake of getting married to the much older French playboy Philippe Junot. It was a beautiful occasion and the bride at least looked happy, but a close look shows two very worried parents. It was a mistake from the start and everyone seemed able to see that save Caroline herself. Problems emerged right away and there were even rumors of abuse. Happily, Princess Caroline was able to extricate herself from the bad situation and the marriage was eventually ruled invalid. She went on to marry her beloved Stefano Casiraghi; a marriage which, though ending tragically, gave her probably the most happy years of family life she has ever known. 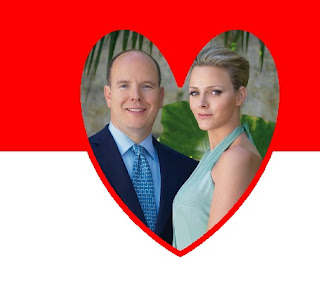 On a happier note, the buzzing has not stopped concerning the engagement of the Sovereign Prince and Miss Charlene Wittstock, nor is it likely to until the wedding. Unfortunately, not all of it has been good. I will admit to being slow to 'take to' Charlene as we say down here, and I still do not feel I really know what kind of woman she is, but I have been amazed at how vicious some people have been and remain towards her even while knowing next to nothing about her. As I said, I do not really know what sort of person she is or what kind of princess she will make but I would rather assume the best and believe that Prince Albert, who does know her quite well and has for quite some time, knows what he is doing. I have also been impressed with how much effort Charlene has evidently put in over the last few years to prepare herself for the 'job' of being princess consort. She has studied how things work at the palace, how certain events are handled, she has learned French and Monegasque (no small feat) and, so I am told, she has joined the Roman Catholic Church. I do not know, off hand, of any other example of a Grimaldi bride-to-be doing so much for such a length of time to be prepared for what she will be taking on when she says "I do". Hopefully, it will not be a wasted effort and the two will have a happy and successful marriage and many years together.
I will say again, as the Sovereign Prince is considerably older than his fiance and not getting any younger, when it comes to possible children I would say the sooner the better. I would like for the Polignac-Grimaldi line to continue and hear the guns at Ft Antoine firing and a birth announcement being read from the palace steps again.

Posted by MadMonarchist at 1:24 AM