Royals Unite Against Cancer in Monaco 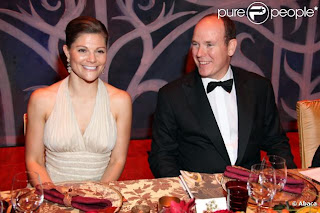 Last Friday a number of royals gathered in the Principality of Monaco for the gala of the European Organization for the Research and Treatment of Cancer. HSH Prince Albert II acted as host to such royal guests as HRH Crown Princess Victoria of Sweden, TRH Princess Astrid and Prince Lorenz of Belgium, TRH Prince Guillaume and Princess Sibilla of Luxembourg as well as HRH Camilla of Bourbon Two-Sicilies, Duchess of Castro. Much attention was given to the Crown Princess of Sweden who came early for drinks with Albert II and the Princely Palace. The Sovereign Prince told a Swedish reporter that the meeting was "wonderful and fantastic".

Prince Albert II and Princess Astrid of Belgium gave speeches at the event. Princess Astrid is the Honorary Chairwoman of the EORTC Charitable Trust, which is based in Brussels, Belgium. Prince Guillaume is also a member of the General Assembly of the EORTC Charitable Trust. The organization was founded in 1976 to unite in a pan-European, multi-national effort to fight cancer. The group currently operations in more than 30 countries.
Posted by MadMonarchist at 12:50 AM