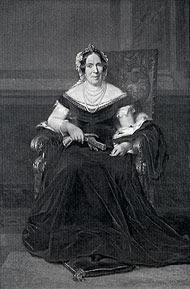 H.S.H. Princess Maria Caroline of Monaco was the consort of Sovereign Prince Florestan I. She was born Marie Caroline Gibert de Lametz in Paris on July 18, 1793 to Charles-Thomas Gibert de Lametz and Marie-Francoise Le Gras de Vaubercey. She grew up to be a fairly well known actress on the French stage and it was in the atmosphere of 'show business' that she met the Monegasque Prince Florestan, the second son of HSH Prince Honore IV of Monaco. The two were performing at the Theatre de l'Ambigu-Comique, eventually fell in love and were married on November 27, 1816 at Commercy. In time the couple had two children; HSH Prince Charles III born in 1818 and Princess Florestine born in 1833.

Prince Florestan had never expected to become Sovereign Prince but when his older brother, HSH Prince Honore V, died in 1841 the Monegasque throne was thrust upon him. All in all he was unprepared for the job, and being the artistic type lacked the temperment of a Mediterranean absolute monarch. It is no slight to say so as no one was more aware of this fact that he was. Fortunately Prince Florestan had a strong right arm in Princess Marie Caroline and it soon became clear that while every respect was given to the Sovereign Prince it was really his strong-willed wife who was running the show in the principality.

Princess Maria Caroline was very conscious of her new status and took the administration of Monaco seriously, especially as the economy had been suffering for some time since Monaco had been placed under the protection of the Kingdom of Sardinia rather than France following the Napoleonic Wars. The populace was also influenced by the liberalism sweeping Europe and were growing increasingly loud in their demands for democracy. Princess Maria Caroline and her husband tried to address the issue and came up with two different constitutions which were submitted for public approval but both were rejected, the city of Menton being the most difficult to please. The situation became worse in 1848 when the revolutions that swept Europe inspired the towns of Menton and Roquebrune to revolt and declare their independence. Anxious to be free of his unwanted position Florestan died in 1856 and his son Prince Charles III who, thanks largely to Princess Maria Caroline, had been well prepared to assume power, proved to be one of the most significant and successful Monegasque monarchs. Princess Maria Caroline also worked with her son to lay the foundations for Monaco to become the number one resort destination in Europe, securing the country's financial future. She died in Monaco on November 25, 1879.
Posted by MadMonarchist at 4:43 PM