Prince of Monaco in California 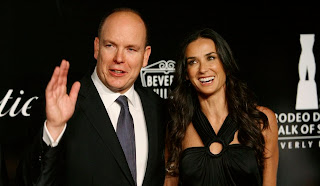 After being given the "Teddy Roosevelt Medal" by Speaker of the House Nancy Pelosi and handing out the Princess Grace awards the Prince of Monaco was off to sunny California where he was hip-deep in Hollywood celebrities in Los Angeles where he attended a gathering in honor of his late mother and Hollywood icon Princess Grace held by the City of Beverly Hills and the Rodeo Drive Committee for her contributions to fashion and entertainment on the 22nd. On Friday night he was presented with the Scripps Institute of Oceanography’s Roger Revelle Prize for the environmental work of the Prince Albert II Foundation. He also gave a lecture on the effects of climate change on marine life. It is unknown, but speculated about, whether or not the Sovereign Prince will visit his daughter, Jazmin Grimaldi, who usually resides in the southern California - San Diego area while he is in the neighborhood. If so, such a visit would probably be kept extremely private and out of public view if at all possible. In recent years Jazmin has set up her own charitable fund seeking donations to help children in the remote islands of Fiji.
Posted by MadMonarchist at 11:56 AM