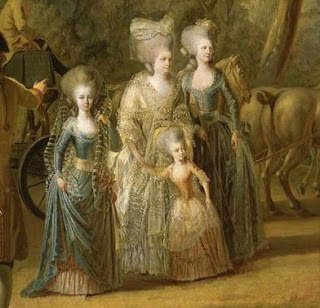 (as a young girl with her mother)
Françoise-Thérèse de Choiseul-Stainville, Princesse Joséph de Monaco is one of those historical figures who seems to slip through the cracks. Her father was Jacques Philippe de Choiseul, Comte de Stainville of whom the general consensus could perhaps best be described as oafish and her mother was his very beautiful and popular wife Thérèse de Clermont d’Amboise who were married in Paris in 1761 when the groom was 40 and the bride barely 15. Jacques was the younger brother of the Duc de Choiseul who was one of the right hand men of the French King Louis XV. They had two daughters, Marie-Stephanie in 1763 and Françoise-Thérèse in 1766 despite the fact that it was not a happy marriage and both husband and wife had affairs.
This has led to some speculation as to whether or not Françoise-Thérèse was really the daughter of Jacques Philippe or perhaps his cousin the Duc d’Lauzun. Finally, after a particularly ugly scene Madame le Comtesse was sent to a convent by her husband. It also meant that Françoise-Thérèse was fairly well ignored by the family of her father for fear that she was not really his, the only exception being her aunt, by marriage, the Duchesse de Choiseul who was very fond of her. In convent school both Marie-Stephanie and Françoise-Thérèse had a reputation for being pranksters and troublemakers (putting ink in the holy water and such stuff) and were considered quite the handful. Of the two of them, Françoise-Thérèse was considered the most wild and unruly. The Princesse de Ligne described her as “rather pretty” but “very untamed” and thought to have been badly raised. 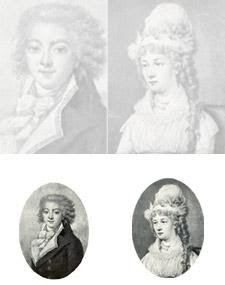 Her beauty seemed more than able to overcome her mischievous behavior and questioned parentage as she had no trouble attracting gentlemen callers and on April 6, 1782 she was very happily married to Prince Joseph of Monaco, son of Prince Honore III of Monaco and Marie Catherine Brignole-Sale. The two were, by most accounts, perfect for each other, very happy together and eventually had three daughters; Honorine in 1784, Athenais in 1786 and Delphine in 1788. Now Princess Françoise-Thérèse of Monaco she seemed to have everything anyone could ever want; security, healthy children and an adoring spouse. However, her wedded bliss was to come crashing down in the tidal wave of the French Revolution which was not to leave tiny Monaco untouched.
When the first violence broke out in 1789 Princess Françoise left for Italy with the Duchesse de Fleury while Prince Joseph joined the heroic counterrevolutionary uprising in the Vendée. She met the famous Lady Hamilton in Naples and was in Venice for the ceremonial marriage of the Doge to the sea. Her freedom of movement became much more difficult after February 14, 1794 when the Principality of Monaco was annexed to the French Republic, thus robbing Princess Françoise of her status as a foreign princess and making her subject to the multitudinous restrictions placed on citizens of the republic. She quickly came back to Paris to collect her children who were staying with the Duchesse de Choiseul and to avoid having her property confiscated as an émigré. Nonetheless, the revolutionary authorities arrested her anyway as she was trying to sort things out. She obtained forged papers and secured her release but then, just as freedom was within reach, it was learned that her husband, Prince Joseph of Monaco, had fought with the counterrevolutionaries against the republic in the Vendée.
Now, not only had she lost the protection of being a foreign princess but she was also wanted for being the wife of a royalist enemy of the revolution. Another warrant for her arrest was issued but she was thankfully hidden in a convent by a friend of the family Rollet d’Avaux. However, eventually she was arrested, without being found out, and in the Winter of 1793/4 held in horrible conditions at the prison Petit Force in Paris. She was later able to secure a transfer to somewhat better conditions at the Anglaises but a spy in the prison learned her true identity, informed her captors and she was quickly sentenced to death. However, Princess Françoise was able to buy herself a little more time by telling the authorities she was pregnant and thus her execution was postponed until after the birth of her child.
She was later inspected though and found not to be pregnant after all and she wrote her goodbye letters, signing her name “Choiseul-Stainville-Joseph-Grimaldi-Monaco, foreig 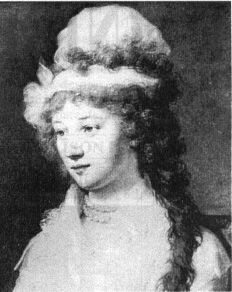 n princess, and dying from the injustice of French judges”. She took a pane of glass from the window and used it to cut her hair, saving the braid for her daughters so that they would have something to remember her by. The Duchesse de Choiseul was also a prisoner of the revolution but would soon be released and would take charge of the girls until their father returned from exile in England. She was not yet 27 when she was taken to the guillotine, the last to make the ride in a tumbrel. She was glad to have rouge for her face as she did not want to appear pale and frightened. Witnesses said she made the trip with a look of righteous indignation and the shine of youthful beauty. She turned to a condemned lady beside her and said, “Courage, my dear friend! Courage! Only crime can show weakness.” She was the last person to be guillotined that day.

Posted by MadMonarchist at 1:21 PM