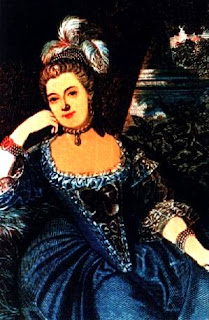 Marie-Catherine de Brignole-Sale was the first wife and consort of HSH Prince Honore III of Monaco, however, their story actually begins with Marie-Catherine’s mother; Marquise Anne de Brignole-Sale. Although some ten years his senior Honore was very much taken with the strong-willed, passionate beauty and was soon carrying on a quite public affair in total disregard of her husband, the skeletal thin but immensely rich Marquis de Brignole-Sale. Anne herself was of the prominent Balhhis of Genoa and Honore carried on an affair with her for several years, even spending a few months living openly with her in Genoa at the Palazzo Rosso. However, her daughter, Marie-Catherine also began to turn heads. She was 15-years-old with dark hair, captivating features and a perfect figure. Soon Honore had cooled toward the mother and began to court the daughter.

The Marquise did not appreciate this very much and ordered Honore to leave. With he did, but only after pledging to marry Marie-Catherine one day. For her part, Marie-Catherine sent a note saying that she would marry no one other than the Prince of Monaco. The problem with the marriage plans was that they required the consent of the Marquis de Brignole-Sale and it should go without saying that he no kind feelings for the man who had cuckolded him for so long. He refused his permission and to the surprise of Marie-Catherine, Prince Honore seemed to give up and go looking elsewhere. In truth, Honore still loved Marie-Catherine but he was determined to marry and start a family with someone, even if not his first choice. Honore set his cap for the daughter of the Duc de La Valliere, whom he had never bet, but who would make a very beneficial match.

Because of his past actions the French court protested loudly at the match in a show of very hypocrisy given how many of them had or were carrying on similar affairs. The King withdrew his support and Honore III threatened to withhold Monegasque support for France such as the military service his family had long provided. Louis XV was unmoved by the threat. The Marquise was also denouncing her former lover but Honore’s strong reply seemed to win her over to the idea. She then began to work on her husband to agree to Honore marrying their daughter and finally the Marquis agreed and Honore sent Marie-Catherine an engagement present; the same jewels that had once belonged to her mother.

On June 15, 1757 the couple were married by proxy in Genoa. An impressive flotilla of ships then set out from the city to deliver Marie-Catherine to Monaco where Honore III was waiting to receive her with plenty of flags and soldiers all dressed in their best. The Genoese ships arrived, dropped anchor and then did nothing for about 15 minutes. Finally a messenger came to politely inform Honore III that he should board the ship to claim his bride. Honore III was outraged at the suggestion. He was the Sovereign Prince of Monaco, a monarch in his own right, and monarchs did not go to meet others; others came to meet him and he said as much. This was too much for the proud Genoese republicans. The bride was descended from French nobility and several Doges of Genoa and they demanded Honore bow to their wishes. A stand-off ensued and finally the Genoese ships pulled up anchor and sailed away along the coast leaving everyone tired, disgruntled and frustrated.

For nearly a week negotiators haggled back and forth as most of the shipboard wedding party became miserable with seasickness. Finally, an agreement was made and the ships returned to Monaco, canon salutes were fired, the troops filed out to their positions and Honore III reappeared. A bridge was extended from the Monaco side to link up with the gangplank of the ship and Honore III advanced halfway, meeting the bridal party in the middle. At least that is one version of the story, the other being that the impatient Honore finally gave up waiting, commandeered a boat and rowed out to the Genoese ship to find his bride, cheered wildly by the galley slaves and to the accompanying thunder of canon salutes. In any event, after a very inauspicious start the two were finally together as husband and wife.

The two honeymooned at the Palais Carnoles, built by Honore II. At first both seemed exceedingly happy. Princess Marie-Catherine had a very emotional, romantic, adventurous nature and she seemed totally caught up in this new turn her life had taken as consort of a small Riviera principality, mistress of the palace known as the Mediterranean Versailles. After eleven months of marriage she gave birth to an heir to the Monegasque throne; the future Prince Honore IV. However, while the Chevalier Grimaldi handled the government and Princess Marie-Catherine focused on raising and spoiling her new son Honore III found he had little to divert himself. Finally, in 1760 he left Monaco for the French court promising to send for Marie-Catherine as soon as he arranged things.

Things were not all peaches and cream at the French court either and soon Honore III was writing sad letters to Marie-Catherine about how much he missed his beloved. In December she left Honore IV with her parents in Monaco and went to France to join her husband. They were troubled from the very outset by a claim for the throne of Monaco by the senior line of the Grimaldi family who protested the heirs of the Mantignon family of Prince Jacques I ruling the principality. The French ignored the claim but Honore III was very unnerved by the threat. After two years Princess Marie-Catherine was pregnant again and very much missing her absent son and so parted with her husband again to return to Monaco. To her great sadness she miscarried and Honore III came back to Monaco to bring his wife back to Paris.

Princess Marie-Catherine began to feel very neglected as she was recuperating while her husband was living the high life at Fontainebleau. Already pregnant again, Honore did not join her but transferred to Normandy while she wrote letter after letter entreating him to come back to Paris where she was staying with her brother-in-law Prince Charles-Maurice Comte de Valentinois. He was nice enough to her but Marie-Catherine and his wife Marie-Christine continuously clashed. Marie-Christine viewed the Princess consort of Monaco as an unsophisticated country girl and Marie-Catherine certainly seemed out of place in the glamorous, glorified pony show that was the French court. She would not wear makeup, she would not wear a train, she followed none of the passing fashion trends and sat out most of the dances. Her only real friend was the widowed Prince de Conde and soon gossip mongers were writing to Honore III that the Prince was trying to woo his wife away from him.

The jealous fury of Honore III might have been at least somewhat more understandable had he not left a mistress of his own in Normandy to race back to Paris to accuse his wife and the Prince de Conde of behaving inappropriately. Princess Marie-Catherine was indignant that she should be accused of such a thing (perhaps thinking her husband had the least right of all to cast stones in that direction) and both parted on bad terms. Honore III left Paris and the Prince de Conde went on cozying up to the Princess of Monaco who seemed much more friendly with him after that.

Honore III did not take Marie-Catherine with him on his grand visit to England and when he returned to Paris his sister-in-law filled him with malicious gossip about his wife and the Prince de Conde. The two separated in all but name and Honore III paraded a succession of mistresses in public before Princess Marie-Catherine finally withdrew from court life and went to a convent at Le Mans where the local bishop was a Grimaldi. The Marquise Anne tried to save the situation and did finally bring about a reconciliation but things were never the same. When the Marquis de Brignole-Sale died he left his vast fortune to his daughter but stipulated that her husband was to have none of it. Honore III was outraged and protested to the Genoese senate but to no avail. The Princess returned to the convent but the still smitten Prince de Conde intervened on her behalf, obtained a legal separation for her from her husband and moved her into his Chateaux de Chantilly. She later bought a chateaux of her own nearby where her children visited her.

When the French Revolution hit, Princess Marie-Catherine went into exile in England, accompanied by the Prince de Conde, whom she married after Honore III died in 1795. Marie-Catherine spent her vast inheritance supporting the French royalists in their struggle against the revolutionaries until she was all but penniless. She died at the age of 74 on March 8, 1813 and was buried in England with the British Royal Family stepping in to cover the cost.
Posted by MadMonarchist at 12:55 AM