When the Emperor Came to Monaco 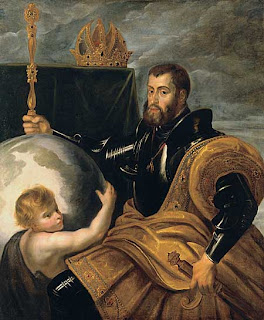 (Holy Roman Emperor Charles V)
The trouble began with the murder of Seigneur Lucien Grimaldi in 1523. He was succeeded by his brother, Bishop Agustin Grimaldi acting on behalf of his young son Honore I. In the feud that erupted between the Grimaldi family (especially the branch still in Genoa) and the murderers of Lucien both sides lined up with the on-going war between King Francis I of France and the Holy Roman Emperor Charles V. The primary leader of the murder plot and the effort to take over Monaco, Barthélemy Doria, was sheltered by the French queen mother, Louise de Savoie. Bishop Augustin later lured him to Monaco and captured him but let him go after being advised against executing the man by Pope Clement VII. Doria then went back to King Francis I and spent the rest of his life in the French army. So, who else did the Grimaldis of Monaco have to turn to but the Emperor?

It was rather significant that the Lord of Monaco at this time was a Catholic bishop. The Holy Roman Emperor Charles V was widely viewed as the Catholic champion of Europe and Pope Clement VII, after giving official papal recognition to Bishop Augustin as heir to his brother and rightful Lord of Monaco, urged him to come to an agreement with the Emperor and join the Hapsburg camp. Thus persuaded, though still cautious, the Lord-Bishop sent a relative, Leonardo Grimaldi, to Burgos to speak to the Emperor about an alliance with Monaco. Leo seems to have been a little overcome by imperial surroundings and more than arrange an alliance, on June 7, 1524 he pledged on behalf of the Lord of Monaco to swear, “total obedience in the service of his emperor”.

Monaco was badly in need of a strong protector it is true, but by his actions Leonardo had all but sold out the sovereignty and independence of Monaco which the Grimaldis had jealously guarded and defended for so long. Bishop Augustin was outraged when he learned what Leonardo had done in spite of the fact that he brought back an appointment from Charles V to the rank of Imperial Counselor and an annual pension of 2,000 écus. The bishop immediately informed the Emperor that Leonardo had overstepped his authority and the Emperor graciously annulled the oath Leonardo had made and recognized the independence of Monaco as a protectorate of Spain (Emperor Charles V also being King Carlos I of Spain).

Several years later, in the summer of 1529, after peace was finally secured with France, Emperor Charles V paid an imperial visit on the newest star in his orbit. He was on his way to Bologna where he was to be crowned by Pope Clement VII with the famous Iron Crown of Lombardy and along the way he dropped anchor in Monaco. Bishop Augustin put on a lavish ceremony to welcome the Emperor with all of the pomp and pageantry that Monaco could muster. For three days Emperor Charles V was feasted and celebrated in Monaco and when he finally departed Bishop Augustin went along with him, at least as far as Genoa, where some other members of the Grimaldi family owned a bank that had extended credit to Charles. The occasion was such an historic event for Monaco that it is still immortalized in a fresco on the façade of the palace chapel of St John the Baptist. (image below) 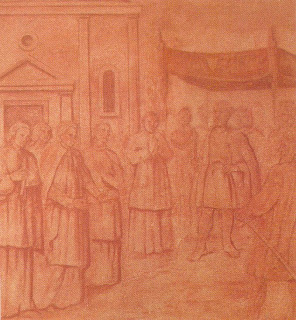 Posted by MadMonarchist at 12:48 AM