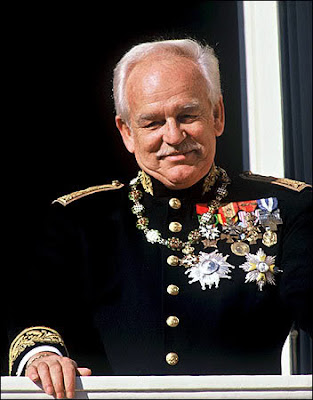 It was on this day in 2005 that His Serene Highness Prince Rainier III of Monaco passed to his eternal reward at 6:35 AM at the age of 81. He had been hospitalized for bronchitis, which developed into a lung infection until his life was finally taken as a result of renal and heart failure. There would certainly have been much more attention given to the passing of the Prince had it not come so soon after the death of Pope John Paul II. For Monaco the death of Rainier III was truly the end of an era. At the time he was the second longest reigning monarch in the world after HM King Bhumibol Adulyadej of Thailand. It is also my opinion that, with the clarity of hindsight, Rainier III will be remembered as one of the greatest monarchs in Monegasque history. This is true for many reasons. Rainier III was the first Sovereign Prince in quite some time to make his principality his primary residence, he was determined to live amongst his people and was adamant that he was Monegasque and nothing else. He showed firm leadership in asserting his authority over the country and ensured that Monaco would welcome people of all backgrounds rather than being reserved only for the super-rich. He expanded his country, diversified the economy to ensure future success when the country could not prosper from gambling revenues alone. His marriage to Princess Grace brought glamor and world attention on Monaco, he made Monaco a place for everyone; a place with excitement and culture, fun and refinement, lavish and family friendly, welcoming to the elites of the world and ordinary tourists. He ensured that Monaco was a place where vast fortunes were made and lost but with a large and professional police force that made it one of the safest countries in the world. He was a forward-thinking man, a stylish prince who embraced the future but also a Catholic monarch who honored the traditions of his country and people. His absence is still felt and he is still sorely missed. May His Serene Highness Prince Rainier III have eternal rest and may he rest in peace.
Posted by MadMonarchist at 12:02 AM