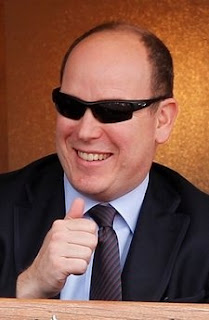 Today is the final day of The Monte Carlo Tennis Masters tournament which began on the tenth. HSH Prince Albert II was on hand, and obviously very caught up in the action, at the semifinal match between Fernando Verdasco of Spain and Novak Djokovic of Serbia yesterday. Sitting with the Sovereign Prince at the match were Melanie de Lusignan and Cristiana Crociani who is the sister of friend of the family HRH Princess Camilla of Bourbon-Two Sicilies.
Results Update: 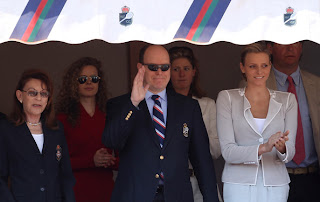 Appearing to watch the final round was princely cousin Elizabeth-Anne de Massy, President of the Monegasque Tennis Federation and the Monte Carlo Country Club where the game was held. Prince Albert II and Charlene Wittstock were also in attendance to congratulate the winner. 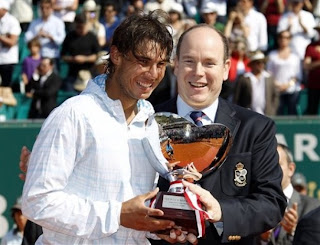 And that winner was Rafael Nadal of Spain, seen here accepting his trophy from the Sovereign Prince. Muy bien Senor Nadal!
Posted by MadMonarchist at 12:34 AM