The Passing of a Princess 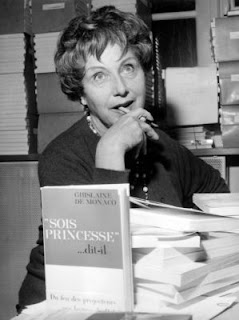 It was on this day in 1991 that HSH Princess Ghislaine of Monaco passed away at Neuilly-sur-Seine. She was the wife and consort, in the twilight of his life, of HSH Prince Louis II of Monaco. She was 35 years younger than the Sovereign Prince when the 69-year-old Louis II fell in love with the former actress. He married her and brought her to the palace where, sadly, most of the family turned a cold shoulder to her. Prince Louis II adored her totally but the rest of the family tended to be suspicious of her, as is often the case when an older man at the end of his life weds a much younger woman. In fact, when the two married Louis' granddaughter, Princess Antoinette, refused to attend (and when she made her first marriage Louis II responded in kind). When Prince Louis II died he made generous provision for his wife in his will but Prince Rainier III blocked this and though he never spoke to Princess Ghislaine she still kept her apartments in the Princely Palace and made use of them from time to time. One of the last major events Princess Ghislaine attended in Monaco was the celebration in May of 1974 of the 25th anniversary of Prince Rainier III coming to the throne. This included a Te Deum at the national cathedral in honor of Prince Louis II and Princess Ghislaine, along with almost the whole Grimaldi family for a change, attended. Although she was rather put aside in Monaco for the most part she remained Dowager Princess of Monaco for the rest of her life, a life that ended on this day, April 30, 19 years ago.
Posted by MadMonarchist at 12:35 AM