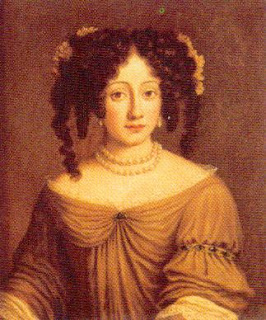 One of the most fascinating and famous figures to touch the history of Monaco and the Grimaldi dynasty was Hortense Mancini, Duchess Mazarin. She was born in Rome in 1646 and was the favorite niece of the powerful Cardinal Mazarin, the power-behind-the-throne in France. She was one of five sisters and all became famous for their beauty. Their father was Baron Lorenzo Mancini but their mother took them to Paris so her ‘eminent’

brother could help arrange socially advantageous marriages for the girls. As far as that idea went things worked pretty well. Laure married the duc de Vendome, Olympe married Eugene-Maurice of Savoy-Carignano (parents of the famous Prince Eugene of Savoy), Marie was an early mistress of King Louis XIV and married Lorenzo Colonna (and if that name doesn’t sound familiar read up on your papal history and it soon will) and Marie Anne married the duc de Bouillon.

What about Hortense though? She was proposed to by none other than King Charles II of Britain (never one to miss a pretty face) and while the King of England, Scotland and Ireland who was also the first cousin of King Louis XIV of France might have seemed like the most prestigious marriage of all -Cardinal Mazarin did not think so. At the time King Charles II was not actively the king of anything and was living in exile on the generosity of friends and relatives. When Charles II was restored to the British throne the Cardinal realized he made a mistake and tried to have a do-over and offered his niece to the Stuart king but the miffed Charles wouldn’t have it. Similar proposals from the Duke of Savoy and the Duke of Lorraine also fell through.

Finally Hortense was married to the fabulously wealthy duc de La Meillerave who was then titled duc Mazarin. It was a lucrative marriage all around but not a happy one. Hortense was a pretty, fun-loving and popular girl; intelligent, carried herself well and the life of the party. Her husband was an obsessively prudish, miserly control freak who wouldn’t let his wife associate with men, refused to allow his female servants to milk cows because he thought it was sexual and even knocked their front teeth out to make them less attractive to men. The guy had problems. He was so paranoid about his wife cheating on him that he made surprise searches of the house at all hours. In short, he made life a living hell for Hortense.

Bullied by her husband and cut off from men she began an affair with a teenage girl which, when her husband found out, earned her a one-way ticket to a convent. The two were such a problem the nuns sent them back and after a nightmarish existence and giving birth to four children Hortense managed to escape on June 13, 1668 with the help of her brother and went to Rome to live with her sister. She need not have worried though as powerful men all over Europe were tripping over each other to declare themselves her protector, the most prominent of which was King Louis XIV. Another was the Duke of Savoy and she went to live under his wing in grand style but as her and the Duke got a little too “friendly” once the Duke passed his wife showed Hortense the door.

What was she to do? Where was she to go? London of course, where the English ambassador to France hoped to win favor by making Hortense the new favored mistress of Charles II. She went to England on the excuse of visiting her cousin Mary of Modena (wife of the future King James II) and as expected Charles was smitten immediately by Hortense and was soon lavishing money and gifts on her as his primary mistress. Things were going great for her, but all those years of repression with her husband must have had an effect on her. Since being freed from so many years of enforced virtue Hortense couldn’t seem to get enough and rumors began to swirl of her having additional affairs with a number of men and women alike. One of her lovers was HSH Prince Louis I of Monaco, which seemed to anger Charles more than the rumors of her lesbian relations. She and Charles managed to remain on good terms but Charles finally pushed her aside and brought back the Duchess of Portsmouth to console him.

Hortense stayed in England for quite some time. After Charles died his brother King James II took good care of her (she was his cousin by marriage) and even after James was overthrown by his son-in-law William of Orange nothing changed except a reduction in her pension. Hortense Mancini died on November 9, 1699 with some even claiming it had been a suicide. One thing is certain, she “touched” 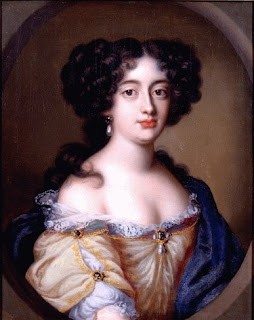 a lot of lives in her years (her life could have been a soap opera) and she had quite an impact on many of the most powerful people of her time. Prince Louis I of Monaco had been absolutely besotted with her. He drenched her in praise and flattery but she seemed more amused by than in love with him. It was another famous mistress, Nell Gwyn, who tattled on her to Charles II. When the King cast her off in a fury Prince Louis offered her a handsome sum to run away with him as his mistress but that shocked Charles into making a better offer and taking her back.

This incident basically ruined what emerging relations there were between Britain and Monaco (Prince Louis I had to quit England and return to the continent) but it was not the end of the role of Hortense Mancini in the history of the Grimaldi dynasty. One of her descendants, many years later, was Louise d’Aumont who married Prince Honore IV of Monaco which means that, despite things not working out between her and Louis I, all of the subsequent Princes of Monaco down to Albert II today have a little bit of Hortense Mancini flowing in their veins.
Posted by MadMonarchist at 1:10 AM