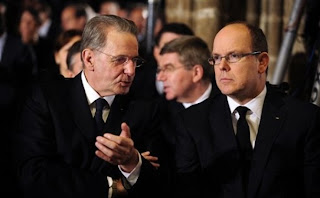 Last Thursday HSH Prince Albert II attended the funeral mass for Juan Antonio Samaranch, former president of the International Olympic Committee at the cathedral in Barcelona, Spain. The Prince had a long association with Samaranch who was one of the longest-serving presidents the IOC ever had. He died on April 21 at the age of 89 at Barcelona hospital of cardiorespiratory arrest. Hundreds came to pay their respects and attend the funeral mass including numerous royals, athletes and politicians. Also on hand, naturally, was current IOC president Jacques Rogge (seen with the Sovereign Prince above). King Juan Carlos, Queen Sofia and the Prince and Princess of the Asturias were all in attendance.
Posted by MadMonarchist at 12:26 AM