Lord Hercules I of Monaco 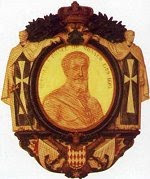 Hercule or Hercules Grimaldi was born on September 24, 1562, the youngest son of four from Lord Honore I of Monaco and his wife Isabella. His eldest brother was Charles II who succeeded his father as Seigneur de Monaco in 1581. His other two brothers, Francois and Horace, both died young and so when Charles II died unmarried and childless Hercules succeeded him as seigneur on May 17, 1589 at the age of 27. His reign was to be one of the more troubled and infamous of the Grimaldi lords of Monaco.

At this time the country was still within the Spanish sphere of influence and their neglect had caused the economy of Monaco to suffer considerably and public discontent was growing. This was an invitation for the ambitious and the disaffected to cause trouble and such was the case when a Monegasque named Cesar Arnaud led 700 men from Provence in a night attack on Monaco. They made a spirited charge but the Spanish troops were able to repel them. Boccone, a notary, also attempted another conspiracy, this time with the intention of driving out the Spanish, overthrowing the Grimaldis and claiming Monaco for Savoy. Again though, nothing came of the effort.

On December 15, 1595 Hercules I married Maria Landi. Together, they had two children, a son and heir; Honore II in 1597 and a daughter; Giovanna or Jeanne Grimaldi who died in 1620. However, Hercules I also had a reputation as a rather unsavory character given to debauchery. This has led to some debate over his demise. On or about November 29, 1604 Hercules was in a dark, narrow alley leaving the house of the Governor Gastaldi on the rue de Milieu, what is now house number 15, when he was stabbed to death. Some say this was part of yet another plot by disgruntled men similar to those Hercules had faced throughout his 15-year reign. Others, however, say they were a collection of angry Monegasque men whose daughters Hercules had defiled. His dead body was then thrown into the sea and later washed up on the shore.

The Monaco Parish Registry records that, "The most noble and worthy seigneur Hercule Grimaldi seigneur of Monaco, marquis of Campagna, called to a better life at the age of about 42. Attacked by a force of 5 or 6 in the Grand-Rue, in front of the house of the podesera master, Bartholomies Dadino, he at once delivered up his soul to God". After his body was recovered he was buried in the St Sebastian chapel of the Church of St Nicholas. His 7-year-old heir thus became Honore II, seigneur de Monaco and he and his sister were hidden away for fear that they would suffer the same fate as their father until their uncle, Prince Federico Landi of Valdetare arrived to rule as regent.
Posted by MadMonarchist at 1:40 AM