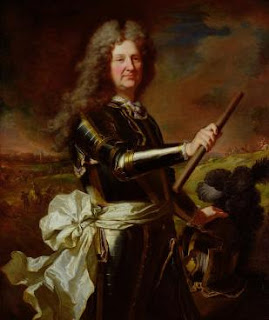 Charles Auguste de Goyon de Matignon, Comte de Grace was the uncle of HSH Prince Jacques I of Monaco and one of the leading soldiers of France in his day. Born in 1647 he was the sixth son of Francois de Goyon, lord of Matignon and Anne de Malon of Bercy. He embarked on a military career at an early age and in 1669 took part in the campaign in Holland in which he distinguished himself and later served usefully in Flanders and Germany in 1684. When his brother Charles died in 1674 he was given the title of Comte d'Grace and in 1688 was made governor of the province of Aunis. In 1689 accompanied King James II of Great Britain and his Jacobites to Ireland where he commanded troops in the effort to restore James II to the throne that had been usurped by his son-in-law William of Orange. Of course, as well all know, the enterprise ended in defeat at the battle of the Boyne. One observer described him as a good and honest man but was less than impressed with his military abilities.

Matignon returned to France after the Jacobite defeat saw action at the sieges of Mons and Namur. In 1691 the King of France gave him the rank of brigadier general and in 1693 the rank of major general. In 1708 he was awarded the supreme military prize with the rank of Marshal of France with the name of Marshal of Mantignon. In 1715 he was dispatched with the nominal King James III of Great Britain (the Old Pretender) for another Jacobite uprising to restore the Stuarts to the British throne, however, this expedition gained even less traction than the first and was quickly suppressed by the government forces of the Hanoverian King George I. Marshal Matignon returned to France and served on the battlefield again in Flanders before his death in 1729 at the age of 83 having by that time also acquired the titles of Chevalier of Torigni and Baron of Bricquebec. In 1942 his portrait was featured on a 20+10 cent Monegasque stamp.
Posted by MadMonarchist at 1:41 AM