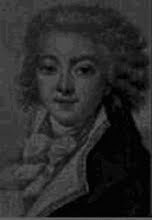 H.S.H. Prince Joseph Marie Jerome Grimaldi of Monaco was born on September 10, 1763 in Paris, France to Prince Honore III and Princess Marie-Catherine. By the time he was born his parents were already drifting a part and it set the stage for Prince Joseph having to depend on his own wits to survive. On April 6, 1782 he married Françoise-Thérèse de Choiseul-Stainville. In what was rather a change for the Grimaldis of Monaco the marriage was a happy one and seemed to be the perfect match. However, disaster was soon visited on the couple with the outbreak of the French Revolution. Seeing the old order threatened Prince Joseph joined with the royalist counterrevolutionaries rising up against the republicans. While away his wife was arrested and eventually sent to the guillotine where she met her death on July 26, 1794. Prince Joseph, a public enemy of the revolution, was forced to go into exile in England for a time when the royalist uprising failed.

When friendly faces came to power Prince Joseph was exonerated from all charges and returned to France at the end of 1795 when, upon the death of his father, he took charge of the family estates on behalf of his ailing brother Prince Honore IV. The new (nominal) Sovereign Prince upset his children by this measure but it was a time of crisis for the family and it fell to Prince Joseph to a large extent to see them through it. With Monaco already taken over by France and a regime change underway with the coming to power of the young army officer Napoleon Bonaparte, Prince Joseph had to see to it that the Princely Family of Monaco was able to stay in the good graces of the new government and powers-that-be. While Honore IV recovered and joined the French army, serving under the famous Joachim Murat, Joseph handled affairs on the homefront.

Whereas Honore IV could not fit in with the new empire society, Prince Joseph made it his business to do so. He had to make a number of tough decisions, such as selling the large family house in Paris to cover mounting debts and taxes (it is now a residence for the French government). The family estates in Valmont and Thorigny had to be put up for auction and the Grimaldis were preyed upon by dishonest speculators, making the struggle for survival almost constant. However, the Bonapartist empire finally came to an end and Prince Joseph used his royalist connections to see to it that the position of the family, the principality and the protectorate were restored by Talleyrand after the return of King Louis XVIII. With the health of Honore IV worse than ever, Prince Joseph went to see him and persuaded his brother to abdicate his French noble titles to his son while he took over the government of Monaco as regent.

This greatly upset Prince Honore-Gabriel (future Honore V) who felt that it was his right to be regent in Monaco rather than his uncle. In the meantime, however, Monaco was returned to the Grimaldi family, Italian became the official language (as it had been before the French takeover) when Prince Joseph arrived to oversee the transition. He had a monumental task on his hands as the French occupation and the disruption of the revolution had left the economy in shambles and the people began to refuse to pay their taxes. In January, 1815 Prince Joseph returned to Paris to try to raise money to stave off disaster and in his absence there was near chaos in Monaco with no prince, no regent and no French troops for the first time in many, many years. Perhaps fortunately for Prince Joseph his nephew took this opportunity to make his bid for the regency and using his mother's family connections tried to enlist the King on his side. Prince Joseph, possibly relieved to escape the post, wrote to his brother and advised him to hand power over to Prince Honore-Gabriel. Prince Joseph died a year later on June 28, 1816.
Posted by MadMonarchist at 1:13 AM