Rainier I, Lord of Monaco 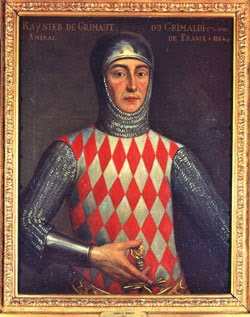 Rainier I of Monaco, although not much remembered today, was quite the legend in his own lifetime, known for his daring exploits on land and sea as well as becoming the first Grimaldi sovereign of modern-day Monaco. The Grimaldi family had long been famous for their seafaring adventures. A Grimaldi had led the fleet that brought the kings of Jerusalem and Hungary to Egypt in the Fifth Crusade. Rainier was to earn much of his own swashbuckling reputation afloat as well. Rainier was born in 1267, the eldest of three sons of Lanfranco Grimaldi, French Vicar of Provence and the son of the Consul of Genoa Grimaldo Grimaldi, and Aurelia del Carretto who later married her nephew by that last marriage Francois Grimaldi. As he grew older he became a skilled naval leader in the service of King Charles II of Anjou in 1296 and the success of his galleys was so skillful that he gained a reputation throughout the Mediterranean for his dash and daring.

The following year, in 1297, Rainier went along with his stepfather and a group of armed men in taking the castle on the Rock of Monaco. This was the famous founding of Grimaldi rule over the area of modern Monaco. The men, led by Francois Grimaldi, disguised themselves as monks, concealing their sword under their long, brown robes. Requesting shelter from the Ghibellines who held the castle they were admitted and quickly sprung upon the guards, killing them and opening the way for the rest of their forces which quickly stormed in and took the castle. This was part of a long standing feud amongst the states of Italy between the Guelph and Ghibelline factions. It started out of a conflict between the Pope and the Holy Roman Emperor over who had final authority, over religious matters in particular. The Ghibellines supported the Emperor whereas the Guelphs (such as the Grimaldis) supported the Pope. The Guelph Grimaldis had been driven from Genoa by a Ghibelline victory but in 1297, in Monaco at least, they had gained the upper hand and Rainier became Lord Rainier I of Monaco.

In those days King Philippe IV of France embarked on a grand and ambitious campaign against the old enemy of England. Some might think that the Continental Blockade was the invention of Napoleon, but in fact it was a revival of the policy of Philippe IV who endeavored to forge alliances across the continent from the Baltic to Sicily to shut out English goods, turn back English merchants and hopefully leave an economically isolated England to wither on the vine. To a large extent the policy worked but the English monarch, the fierce King Edward I, was no man to trifle with and he found the weak point in the French plan which was Flanders. The policy of isolating England had effected them as well and Edward made an alliance with Count Guy of Flanders to monopolize trade between England and the continent. This quickly made other ports, especially French ports like Calais, see their profits dry up.

Another result was that the increasingly wealthy merchants were rapidly becoming power rivals for the old nobility, especially in Flanders. Philippe IV backed the lords while Edward I tended to sympathize with the merchant democrats. When the situation came to blows in 1302 the aristocrats suffered a bloody defeat and Philippe IV was obliged to go looking for help. Remembering the service he had given to Charles of Anjou and Sicily, Philippe turned to Rainier Grimaldi. An arrangement was made and soon Rainier was off the French coast with 16 armed galleys to which the King added 20 of his own though they were less well built and not as expertly manned as Rainier’s veteran craft. Rainier began training the French sailors and preparing them for battle with the English who did not have quite the same reputation for naval excellence that they would gain later. Their Dutch and Flemish allies, however, had a superb naval reputation.

The confrontation came in August of 1304 at the battle of Zierikzee. Despite being outmatched by the enemy fleet the superior training and seamanship of Rainier and his forces won the day and he earned a great victory for France even capturing the Flemish admiral Guy de Dampierre. In gratitude King Philippe IV appointed Rainier to the rank of Admiral-General of France and granted him the title to Villeneuve in Normandy. A period of peace ensued broken only by the occasional skirmish while in the Mediterranean the feud between the Guelph and Ghibelline factions went on with first one side gaining the upper hand and then the other. In 1309 Rainier established a fortified base today known as Chateau Grimaldi. This was in the town of Cagnes and thereafter Rainier was titled Lord of Cagnes. Rainier had been married twice. His first marriage was to Salvatica, the daughter of the Margrave of Final Giacomo del Carretto. By her he had four children; Charles I, Vinci Guerra (who later married Constancia Ruffa), Salvaggia (who later married Gabriel Vento) and Luca, Lord of Villefranche. Rainier’s second marriage was to Andriola Grillo but they had no children. When Admiral Rainier died in 1314 the leadership of the Grimaldi clan passed to his son, Lord Charles I.
Posted by MadMonarchist at 12:22 AM

Email ThisBlogThis!Share to TwitterShare to FacebookShare to Pinterest
Labels: Rainier I, sovereign