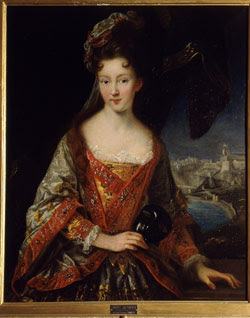 The only woman (so far) to reign over Monaco as Sovereign Princess was Her Serene Highness Louise-Hippolyte the daughter of HSH Prince Antoine I and Princess Marie of Lorraine. Her actual reign was an extremely short one but also extremely important as it is from her line that the current Monegasque Princely Family descends. HSH Princess Louise-Hippolyte was born in Monaco on October 10, 1697 and from fairly early on in life it became clear that there would be no sons for Prince Antoine I and that his eldest daughter would succeed him on the throne of Monaco. Out of six children only Louise-Hippolyte and her sister Princess Margaretha long survived. Practically as soon as Louise-Hippolyte was in her teens the search, and the pressure, was on to find her a suitable husband to secure the future of the Grimaldi monarchy.

By the time Louise-Hippolyte was 15 she was the subject of numerous plots, schemes and intrigues related to her potential marriage as various players tried to engineer an advantage for themselves with the expected future ruler of Monaco. Her father, Prince Antoine, thought it best to find someone who would not be so highly born as to resist giving up his own surname; he was determined that the name of Grimaldi would continue. Finally, the choice for groom-to-be fell on Jacques Francois de Goyon Matignon. The approval of King Louis XIV of France was sought, and received, for the young man to take the name Grimaldi and to rule Monaco jointly with his wife. He was not too high born but still seemed to have excellent credentials. One of his ancestors was the famous Marshal Jacques de Matignon who refused to participate in the St Bartholomew’s Day Massacre against his Protestant countrymen. The couple married on October 20, 1715. Louise-Hippolyte was 18 and her husband was almost 26.

Prince Antoine I died in 1731 and he was succeeded by his daughter, HSH Louise-Hippolyte, Sovereign Princess of Monaco. However, she came to the throne traumatized by all of the intrigue surrounding her search for a husband. So much had been made of the search for, not simply a husband, but a Prince of Monaco who was expected to rule and dominate no matter who he was, Princess Louise-Hippolyte was extremely jealous and suspicious of her husband from the outset. She was not wild about the idea of joint rule with her Prince Jacques. As the eldest child of Prince Antoine I she viewed it as her birthright and duty to be Sovereign Princess of Monaco and the one and only reigning monarch. She struggled with her husband over his assuming more power than she felt he was entitled to. Jacques and Louise-Hippolyte had eight children but nonetheless they never really had a happy marriage. The low opinion Princess Louise-Hippolyte had of her husband was not helped by the fact that he paid her little attention and preferred to live a lavish lifestyle at the French court in Versailles with a succession of mistresses.

At the time her father died Princess Louise-Hippolyte left Paris and traveled to Monaco, arriving on April 4, 1731 to a warm welcome of smiling faces and cheering crowds. When Prince Jacques finally pulled himself away from his pleasures at Versailles to go to Monaco he had a far less enthusiastic reception; the people seemingly sharing the point of view of their princess. The Princess herself though they adored as one of their own, the daughter of the monarch who had done so much for them. It is tempting to wonder how things would have worked out between Princess Louise-Hippolyte and Prince Jacques but we will never know. Sadly, after only 11 months the Reigning Princess was stricken with smallpox and died on December 29, 1731. She was succeeded by her husband who took the throne as Sovereign Prince Jacques I of Monaco.
Posted by MadMonarchist at 11:17 PM