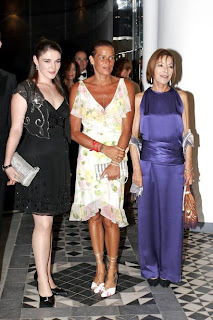 Elisabeth-Anne de Massy, one of the Grimaldi family cousins, was born in Monaco in 1947 to HSH Princess Antoinette of Monaco (sister of HSH Prince Rainier III) and her 'flavor of the month' Alexandre-Athenase Noghes. As such she is a first cousin to HSH Prince Albert II and Princesses Caroline and Stephanie and was the niece of HSH Prince Rainier III. There had been family problems between Rainier III and his sister but things had warmed enough by 1965 that she was chosen to stand as godmother for HSH Princess Stephanie. Despite being born out of wedlock her parents did marry in 1951, legitimizing her and allowing her to have a place in the order of succession to the Monegasque throne.

At the time, as Rainier III had no offspring eyes were on Princess Antoinette as the potential source of future security. This was increased when she later had a son, Christian Louis and then another daughter, the tragic Christine Alix. Efforts, real or overblown, by Princess Antoinette to take the throne for herself and her children prompted her brother to expel her from Monaco at one point, but happily her children were not forced to share her temporary shunning and over time the family has evidently patched things up quite well. Elisabeth-Anne was married to Bernard Alexandre Baron Taubert-Natta from Switzerland in 1974 and the couple had one son; Baron Jean-Leonard Taubert-Natta for whom Prince Albert II stood as godfather. However, the couple later divorced and in 1984 Elisabeth-Anne married again, this time in London, to Nicolai Vladimir Costello, dit de Lusignan by whom she had her daughter Melanie-Antoinette de Lusignan (who was born in Monaco).

Elisabeth-Anne is quite popular in the Principality today because of her extensive charity work. She is also sometimes seen at family functions and is especially keen on tennis. She serves as the President of the Monegasque Tennis Federation and of the Monte Carlo Country Club. After the death of Rainier III and the accession of Albert II she lost her place on the list of succession which was fairly far down the list behind her mother, elder brother and his family. It does not seem to bother the woman, nor does the fact that most of the attention given to her side of the family in recent years has fallen on her daughter Melanie who is very photo-friendly.
Posted by MadMonarchist at 1:03 AM