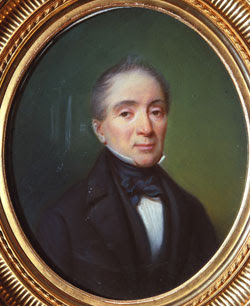 The future Prince Florestan I, eighth Sovereign Prince of Monaco, was born in Paris on October 10, 1785 as Tancrede Florestan Roger Louis Grimaldi to Prince Honore IV of Monaco and Princess Louise d’Aumont Mazarin. An artistic soul he never thought to become sovereign of Monaco and was not prepared for the job. His elder brother, Prince Honore V, seemed to have everything in hand and Florestan followed his dream to perform on the stage and became an actor at the Theatre of the Comic Ambiguity in Paris. On November 27, 1816 he married actress Maria Caroline Gilbert de Lametz at Commercy and the couple eventually had two children; the future Prince Charles III of Monaco and Princess Florestine Gabrielle Antoinette Grimaldi. Florestan was perfectly happy with his artistic pursuits and was not at all interested in becoming the leader of Monaco but, much to his chagrin, his brother Honore V died childless and on October 2, 1841 he became Sovereign Prince of Monaco.

Florestan was not cut out to be an absolute monarch and probably no one was more aware of this than himself. To make matters worse his brother had not left things in the best of shape in Monaco. Honore V had been, in many ways, a strong, astute and practical ruler but he left this mortal coil unpopular and the public felt too heavily taxed and generally dissatisfied with the state of affairs in the Principality and were demanding a greater voice in government. Prince Florestan was also hampered by the fact that his advisors often seemed as indecisive as he was and there was a chronic lack of good suggestions. It is commonly held that the only thing that kept the Monegasque government afloat was the driving force of Princess Maria Caroline. However, Prince Florestan should be given credit for doing his best in a job he neither sought nor was prepared for. He tried to improve education by starting more advanced schools, he tried to alleviate poverty by building poor houses and offering jobs and the Monegasque equivalent of soup kitchens. Nonetheless, people found other things to complain about such as the regulation on teaching standards and the lack of democracy.

To make things worse Monaco was about to face the biggest crisis of their national history since the French Revolution. The liberal chaos of 1848 was sweeping Europe and Monaco was not immune to the disease. As the tremors of revolution grew stronger Prince Florestan felt he had no choice but to turn to the protecting Kingdom of Piedmont-Sardinia for help. The Sardinian troops would be a double-edged sword however, providing a safeguard against outright revolution but also a loss of independence to the House of Savoy that had long coveted the Principality of Monaco. Indeed, as the popular furor grew louder the Sardinians worked to encourage dissatisfaction and turmoil so as to pave the way for the outright seizure of Monaco for themselves. When King Carlo Alberto of Sardinia gave in to liberal calls for constitutional government this set a dangerous precedent for Monaco as many in the small principality began to advocate for annexation by Sardinia. Agents were quite adept at portraying the Grimaldi monarchy as tyrannical and painting the Kingdom of Piedmont-Sardinia as a liberal savior.

Prince Florestan was anxious to avoid trouble and seemed to be counting the days until he could hand over power to his son, Prince Charles, who was already taking an ever larger role in the government. Prince Florestan was willing to grant constitutional government as well but the two proposed constitutions were rejected particularly by the people of Menton. Prince Florestan floundered from one course of action to another, trying to placate the mob, trying to negotiate with them and Sardinia, changing his mind, rolling back previous decisions and so on. When Sardinian troops under General Gonnet marched in ostensibly to protect Prince Florestan many people turned out to cheer them and King Carlo Alberto. The soldiers and civilians mingled together which was an alarming sight to see and to make matters worse word came that revolution had broken out in Paris.

Encouraged by events in France, which were being emulated across Europe in 1848, the people of Menton and Roquebrune revolted, formed a National Guard, raised the Sardinian flag and called on King Carlo Alberto for protection. The King was more than willing to comply, though annexation was not forthcoming, and the Sardinian troops marched back in. The vote for the annexation of Menton and Roquebrune passed unanimously; fairly convincing evidence that it was fraudulent. The annexation undoubtedly would have happened were it not for the Sardinian defeat at the hands of the Austrians at the battle of Novara in 1849. France was also not interested in Sardinia enlarging herself at the expense of their former protectorate. As a result Menton and Roquebrune were declared free towns which no one seemed to know what to do with or under whose jurisdiction they actually fell. In Monaco it was still hoped that they would remain or wish to rejoin the Principality of Monaco after getting a taste of Sardinian occupation. Prince Charles went to Menton in 1854 hoping to rally support for Monaco and the Grimaldis but although his welcome was initially a warm one the authorities eventually arrested him.

The French stepped in and were able to obtain the release of Hereditary Prince Charles and there was some hope in Monaco that the new leader of France, Napoleon III, might prove to be their savior but Sardinian support for France and Britain in the Crimean War meant that Monaco was left friendless. It was then, with Monaco divided, suffering a heavy financial strain and with roughly eighty percent of her territory in political limbo and under foreign occupation that Prince Florestan died in Paris on June 20, 1856. It was left to his son, Prince Charles III, to deal with the consequences of the many disasters that had befallen Monaco during his reign. Although he was a reluctant and unprepared prince, Florestan had done the best he could to deal with situations that were inflicted on him by forces beyond his control. It is, perhaps, also to his credit that his son Charles III would prove a far more formidable prince.
Posted by MadMonarchist at 12:28 AM

Email ThisBlogThis!Share to TwitterShare to FacebookShare to Pinterest
Labels: Florestan I, prince of monaco, sovereign