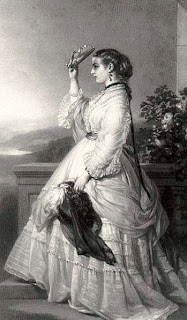 She was born Lady Maria Victoria Douglas-Hamilton on December 11, 1850 to the 11th Duke of Hamilton and Princess Marie Amelie of Baden. When the Grimaldis began looking for a suitably high-born wife for the heir to the throne, Hereditary Prince Albert, they were steered toward the young Lady Hamilton who was a third cousin of the French Emperor Napoleon III and first cousin to Queen Carola of Saxony, Queen Stephanie of Portugal, King Carol I of Romania

and Countess Marie of Flanders; mother of the future Belgian King Albert I. Princess Maria Caroline of Monaco, Albert's grandmother, was the driving force behind the "project" and she had earlier tried to arrange a marriage with Princess Mary of Cambridge but the formidable Queen Victoria was not about to let that happen. Emperor Napoleon III advised the Princess to lower her sights a tad and he helped arrange the match with Lady Hamilton. She and Prince Albert first met at one of the Emperor's parties in 1869.
The couple married soon after and within the year the 19-year-old Scottish Princess of Monaco had given birth to a son, named Louis, who would one day inherit the Monegasque throne. However, Princess Mary Victoria was not happy with her husband, she was not happy with Monaco and generally not happy about much. Even before she had given birth to Louis (July of 1870) she had announced in January that she was leaving Monaco and separating from Prince Albert and no one could persuade her otherwise. When she left she took young Louis with her and, a few years later, when Prince Albert tried to get the boy back it led to legal strife between the former couple. In 1878 the Princess began to seek an annulment from Rome. She claimed that her mother had forced her into the marriage.
Since the product of the union was to inherit the throne of Monaco the investigation into the validity of the marriage took on a special importance and the Pope appointed a special commission to handle the matter. The two sides squared off as the Princess argued that the marriage was invalid and should be dissolved while Prince Albert argued the contrary. Tongues wagged when the marriage was declared invalid and the Pope refused to confirm the ruling until it could be looked into further. The Pope ordered a new commission to retry the case and the next time Prince Albert was much more involved in trying to defend the validity of his marriage. However, the ultimate result was the same and the marriage was annulled on January 3, 1880 by the Church with the provision that Prince Louis remained legitimate and able to inherit the throne one day. HSH Prince Charles III declared the marriage dissolved in the civil law of Monaco on July 28.
That came none too soon as on June 2, 1880 the Lady Hamilton married her second husband, Count Tassilo Festetics von Tolna. They had four children and lived well enough until the former Princess of Monaco passed away on May 14, 1922 in Budapest, Hungary.
Posted by MadMonarchist at 10:53 AM