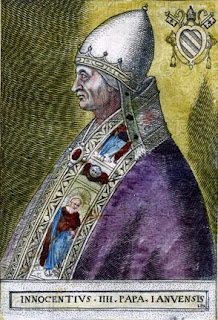 In the history of the Catholic Church one pontiff who, inadvertently, had a major impact on Monaco was Pope Innocent IV. Coincidentally enough he was a native of Genoa, born there as Sinibaldo Fieschi in 1195. He was educated in Parma and Bologna until being called to Rome to serve in the Curia in 1226. The Church had enjoyed a succession of strong popes, particularly Pope Innocent III during whose reign the Church reached its peak of political power in Europe. Lately, however, conflicts had arisen with the Holy Roman Emperor Frederick II (quite famous and formidable in his own right he was known as the ‘Wonder of the World’). After a very long and contentious conclave Cardinal Fieschi was elected, a decision he accepted with great reluctance. He had been on friendly terms with the Emperor but as pope he could have no favorites and Frederick II expected this and it surely turned heads when he took as his name Innocent IV.

Problems arose almost immediately over imperial control of the Church (such as in the appointment of bishops) and the earlier seizure of northern Italy from the papacy by the Emperor. Italians were roused to anger against the German monarch and open conflict seemed inevitable. In 1244 the Pope left Rome (where German agents made things dangerous for him) and moved to Genoa and from there he later went in disguise to France where he was warmly received in Lyons. Safe to act freely he summoned a council aimed at reminding the Emperor that his power had limits. On July 17, 1245 the Pope and assembled bishops formally excommunicated Frederick II and absolved his subjects of all allegiance to him. All across Europe there were preparations for war but, perhaps fortunately for the Pope, Frederick II died only five years later which ended the crisis for the moment and Innocent IV returned to Rome.

The Pope had numerous political as well as religious matters to deal with and, like the previous pontiff of his name, maintained that as the Pope was the Vicar of Christ he had final authority over all kings and princes. He intervened in Portugal, Austria but could be a strong ally to monarchs as well as an adversary, taking the side of King Henry III of England even when the nobles and bishops of the country were opposed to him. He even sent a mission to the Great Khan of the Mongol Empire, Guyuk Khan, grandson of Genghis Khan. He asked the Mongol Emperor to cease his attacks on Christian countries and advised him to become a Catholic. Guyuk kept his own religion and sent a message back demanding that the Pope and all the monarchs of Europe submit to the rule of the Great Khan. That submission was not forthcoming.
In his latter days Pope Innocent IV was again occupied by problems with the Holy Roman Empire, specifically the offspring of Frederick II who were still struggling for domination of Italy. He died in 1254 in Naples but the battle lines had already been drawn and across Italy, particularly northern Italy, factions emerged which supported the Pope (the Guelphs) and the Emperor (the Ghibellines). One of the places where this rivalry was fiercest was in the Pope’s native Genoa where both sides made war against each other in true vendetta fashion. The result was a Ghibelline victory and the expulsion of the Guelf families, one of which was the House of Grimaldi. Driven from their home they looked to take their revenge and seek their fortunes elsewhere and the target they had in mind was the Ghibelline fortress on the Rock known as Monaco.
So, if you have ever wondered why Pope Innocent IV was featured on a Monegasque postage stamp...now you know.
Posted by MadMonarchist at 12:44 AM