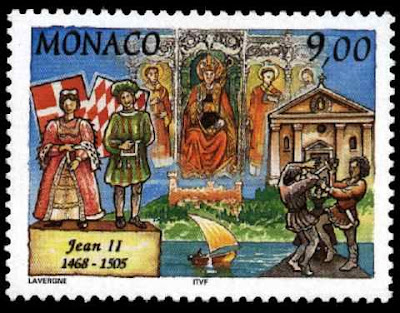 When the formidable Lord Lambert died on March 15, 1494 the throne of Monaco passed to his eldest son Jean II. Only 26 when he became Seigneur de Monaco, Jean II nonetheless showed from the start an astute judgment and made good decisions, winning him praise from many quarters. He seemed to have a good head on his shoulders, was very active and hard working but also possessed a rather fiery temper that sometimes worried onlookers. He was, in many ways, a man of his time and place much like many of the other Renaissance lords. He was intelligent, ambitious, very protective of his prerogatives and authority and a man of great taste and high style.

All around the Mediterranean there was an immense boom in trade and commerce and Monaco, and the House of Grimaldi, profited greatly by it with Seigneur Jean II lavishly improving his castles in Menton and Roquebrune as well as Monaco. There were also military expenditures with the outbreak of the Italian Wars. Jean II dutifully rallied his forces to assist King Charles VIII of France in his conquest of Naples. When the tide turned against the French, Jean II likewise used his forces to cover their retreat. King Charles VIII was very grateful to Jean II for his help and made him captain-general of the Riviera di Ponente, granted him the right to patrol for pirates and paid him a proportion of the value of the cargo being protected and also gave him the right to “import duty-free the grain and wines of the ports of Provence”.

Seigneur Jean II was proving a highly successful monarch but with success invariably comes enemies. The people of Marseilles, for example, were not happy with the special favors being shown Monaco and the Duke of Milan, Ludovico Sforza, was so outraged at the rise of the Grimaldis of Monaco that he tried to have Jean II assassinated. The attempt did not succeed and the Duke of Milan was dealt with by the new King of France, Louis XII, who renewed the invasions of Italy, defeated Sforza and made himself lord of Genoa and Duke of Milan. King Louis XII also maintained the good relationship with Monaco by appointing Lord Jean II governor of Ventimiglia and ensuring that the special maritime privileges he enjoyed would remain in place.

Jean II of Monaco was riding along with King Louis XII when he made his triumphal entry into Genoa in 1499; a scene shown in a famous painting by Jean Marot done in 1507. However, Jean II worried some of the French courtiers with his violent temper. Monaco and the House of Grimaldi were riding high and the alliance with France seemed to be working out greatly to their benefit. The independence of the country was secure, their enemies defeated and Monaco was prospering. However, there were still problems for the House of Grimaldi. One of the worries was the succession. Jean II had earlier married Antonia de Savoy, natural daughter of the Duke of Savoy by his mistress Libera Portoneri in 1486. However, Jean had only a daughter and no sons to succeed him which meant that his heir was his brother Lucien, with whom the volatile Jean II did not always get along.

On the night of October 10, 1505 Lord Jean II was at his castle in Menton with his brother Lucien and their mother Claudine. During the night there was evidently an altercation and when Claudine cried for help servants rushed in to find Jean II dead on the floor in a pool of his own blood. He had been stabbed to death, presumably by his brother Lucien. It is probably safe to say that the death of Jean II is the most famous murder mystery in the annals of the House of Grimaldi. Lucien claimed that Jean II had announced he would sell Monaco to Venice and when Lucien challenged this Jean II attacked him with a knife and in the ensuing struggle Lucien killed his brother in self-defense. Was this what really happened?

Anyone who knew Jean II knew of his fiery temper and could imagine him lashing out at his brother in a rage. However, the idea that he planned to sell Monaco to Venice seems too far-fetched to be believed. Not only would it be unthinkable that Jean II would even consider such a thing it is absurd to believe that Venice would have wanted it considering that Monaco was so far from their own sphere of influence in the Adriatic and eastern Mediterranean. Was it rather simply a political murder on the part of an ambitious brother? That too seems hard to believe as Lucien never seemed the type and he was set to inherit the throne anyway. In addition, the Lady Claudine never showed any disfavor toward Lucien after this incident. The facts, it seems, are few and the real motive behind the violent end of Seigneur Jean II of Monaco may always remain a mystery.
Posted by MadMonarchist at 12:21 AM