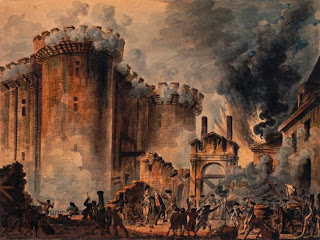 Today the republicans of France celebrate the storming of the Bastille, usually used as a way to mark the start of the French Revolution. The "accepted" viewpoint is that the Bastille represented tyranny and oppression and the storming of the Bastille and the subsequent revolt was a glorious uprising of the people for 'liberty, equality and brotherhood'. However, facts can often get in the way of a good, rabble rousing story. The fact is that the Bastille was ugly and imposing but was not a terrible prison. At the time of the storming it held only a few petty criminals and lunatics. Moreoever, the Revolution that followed did not deliver freedom and liberty but a horrific bloodbath, known even at the time as the "Reign of Terror" which was not finally ended until the imposition of the authoritarian regime of Napoleon. It was not a battle between suffering masses and a cruel elite, in fact it was the poor common people who suffered the most and far more of them were murdered than were aristocrats. It was a terrible turn of events that brought greater suffering than anyone in Europe at that time had ever seen.

The storming of the Bastille also set events into motion that led to misery and suffering for France's neighbor Monaco. Shortly after the Bastille fell the revolutionary instigators infiltrated the lands of the Prince of Monaco and encouraged uprisings and demands for government power in Monaco, Menton and Roquebrune. HSH Prince Honore III was caught in a desperate situation. He allowed the formation of independently elected councils in the towns of his domain to appease his subjects and then rushed to Paris to try to save his considerable estates as a member of the French nobility. On August 4, 1789 he lost everything with the adoption of the abolition of all feudal rights and privileges in France. Promises were made to compensate him as he was a foreign prince and the Grimaldis had been given their French titles as payment for services to France but nothing ever came from it. The Grimaldis and Monaco were pulled down into the abyss that was the French Revolution.

The Prince de Conde (whose paramour was Honore III's ex-wife) gathered the royalist emigres to fight for the Kingdom of France and Prince Joseph of Monaco (a veteran of the Lorraine Dragoons and the Royal-Cravate) joined them. On October 22, 1792 French revolutionary forces occupied Monaco which Honore III protested but could not stop and his petitions were ignored. A Monegasque branch of the Jacobin Club, a radical bloodthirsty society led by the notorious executioner Robespierre, was set up in Monaco and the palace was ransacked by a revolutionary mob. In January of the next year they finally got around to arranging a "vote" to depose Honore III and allow Monaco to be annexed to France. Relegated to a mere cantonal seat in the Alpes-Maritimes department the "People's Council" voted to change the name of Monaco to Fort d'Hercule.

These were the darkest days for the House of Grimaldi. Prince Honore III, old and soon to die, tried to get back simply his own personal property but even this was denied him. Prince Joseph went into exile and Honore III and his son Honore IV were thrown in prison by the revolutionary regime. Honore IV's ex-wife Louise-Felicite and their son Prince Florestan were also put in prison. All of the property of the Grimaldi and Mazarin families were confiscated and Princess Francoise-Therese, the beloved wife of Prince Joseph, went to the guillotine as the last victim of the Reign of Terror. Ironically it was on that very day, 9 Thermidor on the revolutionary calendar, that Robespierre himself, the instigator of the nightmarish bloodlust, was arrested by his own revolutionary cohorts. That would not be the end of the ordeal and anyone observing the situation could have understood the Grimaldis and the people of Monaco giving up. Thankfully, they did not and their fortunes were ultimately restored but the spiral downward, toward revolution, occupation, terror and death all started today, July 14, in 1789 with the storming of the Bastille.
Posted by MadMonarchist at 4:01 AM