Prince Albert Speaks on the Environment 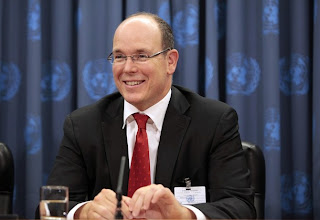 Yesterday HSH Prince Albert II, in New York City for the UN General Assembly, addressed a news conference at UN headquarters on the environment and in particular the impact of climate change on the Arctic, an area he is very familiar with following in the footsteps of his predecessor and namesake on the Monegasque throne. For someone who is easily annoyed with the whole environmentalist movement I have to give the Sovereign Prince of Monaco a great deal of credit and would consider his words to hold far more weight than someone like former US VP Al Gore. That is because Prince Albert has taken the advice of the Chinese sage who said "go thyself". He has gone to the Arctic and the Antarctic and other areas to see the situation for himself and, unlike many others who seem eager only to profit from environmentalist fears, Albert II has actually put his money where his mouth is. The Chicago Field Museum recently made public that the Prince Albert II of Monaco Foundation had donated about $537,344 toward a 3-year project to establish new conservation landscapes in the Amazon region of Peru. You see what can be done without government regulations, forced taxation as compared to the philanthropic power of simple princely status? Quite a lot it seems.

Posted by MadMonarchist at 12:19 AM