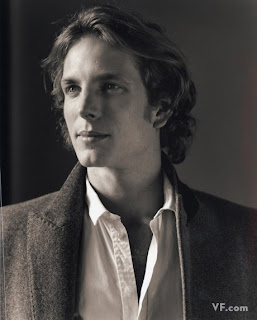 Andrea Albert Pierre Casiraghi is the oldest son of Hereditary Princess Caroline of Monaco and, as things stand today, second-in-line to the Monegasque throne. He was born on June 8, 1984 in Monaco at the Princess Grace Hospital Center in Monte Carlo to Princess Caroline and her husband Stefano Casiraghi. Sadly, young Andrea was only 6-years-old when his father died in a boating accident. Described as sensitive, introverted, friendly and athletic he inherited a sizeable oil fortune from his father (sister Charlotte was given an island) and it did not take him long to become one of the most photographed "royal" lady killers in Europe. Not surprisingly he is rarely seen without some lovely creature on his arm. However, Andrea is no brainless jock; he speaks four languages and earned a degree in visual arts and international politics at the American University of Paris. His known hobbies include football (soccer), horseback riding, an assortment of water sports, skiing, reading and collecting "swatches" (you know, those wristband watches from Switzerland that were big in the 80's) and he has taken on increasingly more official duties over the years on behalf of his mother. According to his uncle, Reigning Prince Albert II, since 2007 he has been living in New York City doing under-grad work.

Although still untitled, Andrea has taken on the style of a Renaissance prince having studied at the International School of Paris, McGill University in Canada and the American University of Paris he rides horses, skis and plays guitar. He has also taken on more serious duties recently in keeping with his status as potential heir to the Monegasque throne. Since 2004 he has worked with his mother's organization AMADE (World Association of Children's Friends), has taught children in Africa and in 2006 went to Manila on behalf of AMADE and the Virlanie Foundation. He was accompanied on that trip by his most consistent girlfriend to date Tatiana Santo Domingo. In 2007 he became the patron of the Motrice Foundation which works to find a cure for cerebral palsy.
Posted by MadMonarchist at 1:54 AM