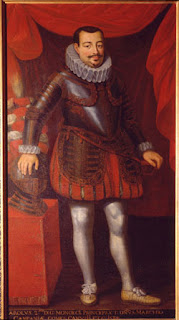 Lord Charles II was the son and heir of Lord Honore I of Monaco and his wife Isabella Grimaldi who had four sons and five daughters. Born in 1555 he came to the Monegasque throne upon the death of his father on October 7, 1581. He was 27-years-old and Monaco was still in the midst of being caught between the contesting spheres of influence of France and Spain. Shortly after coming to the throne Monaco was attacked by 500 French and Corsican troops who attempted to storm the Grimaldi stronghold. It was then, in the midst of the attack, that one of the most famous miracles of Monaco occurred. As the story goes, St Devote appeared over the walls of the fortress and began giving the attacking troops a strongly worded lecture, particularly the Corsicans as St Devote is the patron saint of both Corsica and Monaco. The saint shamed the Corsicans for daring to attack the Monegasque who had taken such care of her mortal remains ever since her body arrived on the shores of Monaco. The Corsicans were terrified and withdrew from the attack and the assault soon fell apart, ending in total defeat for the attackers. Charles II gave thanks to the patron saint of Monaco for this intervention but his rule was not to last for very long. Unmarried and childless he died at age 34 after a short reign on May 17, 1589 after which the throne passed to his youngest brother Hercules I.

Posted by MadMonarchist at 1:00 AM