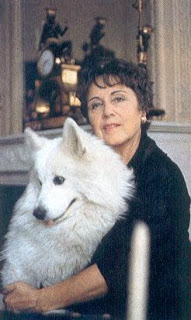 She was the last living consort of a Sovereign Prince of Monaco and she was born Ghislaine Marie Francoise Dommanget in Rheims, France on October 13, 1900 to French cavalry Colonel Robert Dommanget and his wife Marie Louise Meunier. She grew up with a love for the stage and eventually became a fairly well known and accomplished comedy actress. She married a fellow actor, Andre Brule, but the marriage did not last and the two eventually divorced. On July 24, 1946 she married HSH Prince Louis II of Monaco and had the distinction of being the first woman to marry into the Grimaldi family without presenting a dowry. The two were married in Monaco, Louis II being 76 at the time and his bride was almost 46. By 1946 Louis II, a hardened veteran of the Foreign Legion and decorated hero of World War I, was worn out by his long and trouble-filled reign and the added stress of occupation during World War II by Italian and later German forces. He spent most of his time away from Monaco in Paris. Princess Ghislaine was to be his primary comfort and companion in this last period of his life.

Following the divorce of his only daughter, Princess Charlotte, Louis II looked to his grandson Rainier to be the heir to the throne and his mother abdicated her succession rights to her son. Less than three years after their marriage Prince Louis II passed away on May 9, 1949. The 48 year old Princess Ghislaine continued to live in Paris for the most part and unfortunately did not get along well with her step-grandson, now Sovereign Prince of Monaco, Rainier III. She was officially titled Princess Dowager of Monaco and though she had her problems with Rainier III (who eventually cut off her pension from the Monegasque government) she did have a fairly good relationship with his wife Princess Grace whom Rainier had married in 1956. It surely helped that both had been actresses before becoming Princesses of Monaco.

When Princess Grace died tragically in 1982 Princess Ghislaine went to Monaco for her requiem mass and impressed everyone with her style, bearing and solemnity. With no consort for Monaco it was technically Princess Dowager Ghislaine who was again the highest-ranking woman of the Princely Family but, as most know, it was young Princess Caroline who effectively took over the job of trying to fill her mother's shoes. Remaining mostly in Paris as usual Princess Dowager Ghislaine lived to the age of 90 before her death on April 30, 1991 at Neuilly-sur-Seine.
Posted by MadMonarchist at 3:14 PM