Albert I, Monaco and the Great War

August is a month to remember the horrific outbreak of World War I, the conflict that has been described as an act of mass-suicide by the western world. It is not, however, often thought of in connection with Monaco yet the principality, though neutral, was greatly affected by the Great War. The reigning monarch, HSH Prince Albert I, had become an avowed pacifist by 1914 and his background probably had alot to do with this and the Prince was deeply torn by the conflict. He was a veteran of the military having served in the French and Spanish navies and he knew what war was all about. France was the protecting power 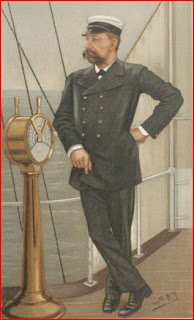 of Monaco and there was no country to which Monaco was closer. Yet, there were also family ties with Germany. One of Prince Albert's many foreign decorations was the Order of the Black Eagle of Prussia (the dominant state in the German Empire). His mother was from Belgium and the invasion of that country no doubt struck a cord with him.

Yet, to his credit, unlike other pacifists, Albert did not stop at words and took action to do what he could to try to avert war. He set up the International Institute of Peace in Monaco in the hope that countries would talk through their problems there rather than resorting to military force. He also spoke directly with German Kaiser Wilhelm II to try to dissuade him from taking military action against France but it was, obviously, to no avail. He tried to convince the Kaiser that such a conflict would be a disaster for all involved and indeed all of Europe and the world. Of course, after a certain point even the Kaiser proved powerless to stop the march to war. After the outbreak of World War I Prince Albert was neutral but not totally uninvolved and felt a great deal of sympathy for the people of Belgium and northern France who were suffering under German occupation. Again, he contacted Kaiser Wilhelm II directly to urge him to restrain his forces, particularly General Karl von Bulow, in their treatment of the conquered populace. As a result of his strong actions he was able to save two villages in Alsace from probable annihilation by the German forces. Prince Albert also provided humanitarian relief to the Allied soldiers in the form of hospitals and convalescent centers and his own son, Prince Louis, served in the French army during the war with great courage and heroism, eventually becoming a general.
Although not often remembered Prince Albert I of Monaco should be given credit for having more foresight than many other world leaders at the time and actively tried to prevent the First World War and to ease the suffering of those involved once that calamity erupted.
Posted by MadMonarchist at 12:40 AM

Email ThisBlogThis!Share to TwitterShare to FacebookShare to Pinterest
Labels: Albert I, World War I