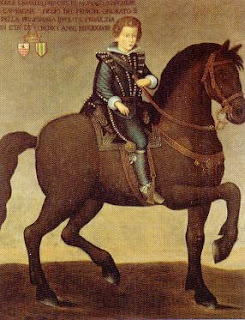 HSH Prince Hercule of Monaco was born in 1623 to HSH Prince Honore II and his wife Princess Ippolita Trivulzio of Milan. He was brought up in Monaco to be the heir of the principality (once Honore II achieved his goal of obtaining recognition as a prince) and was made a commander of the Order of Alcantara by the King of Spain just prior to Honore II breaking with Spain, defeating the garrison and taking Monaco into the French sphere of influence. When the change came Prince Hercule was made Marquis Les Baux by King Louis XIII of France. This was justified as Prince Hercule had played a key role inn the final attack on the Spanish garrison in Monaco. He led the attack on the Serravalle Tower, taking the sentries prisoner.

Honore II grew old and feeble with gout but he was satisfied that the future of Monaco rested on his son Hercule who married Aurelia Spinola on July 4, 1641. The couple had one son and three daughters so the succession seemed secure. However, disaster struck on August 1, 1651 when Prince Hercule was shot in the back by an incompetent musketeer while target shooting in Menton. He died the following day to the great saddness of his family at the age of only 27. Because of his loss Honore II would instead be succeeded by his grandson; HSH Prince Louis I of Monaco.
Posted by MadMonarchist at 12:26 AM